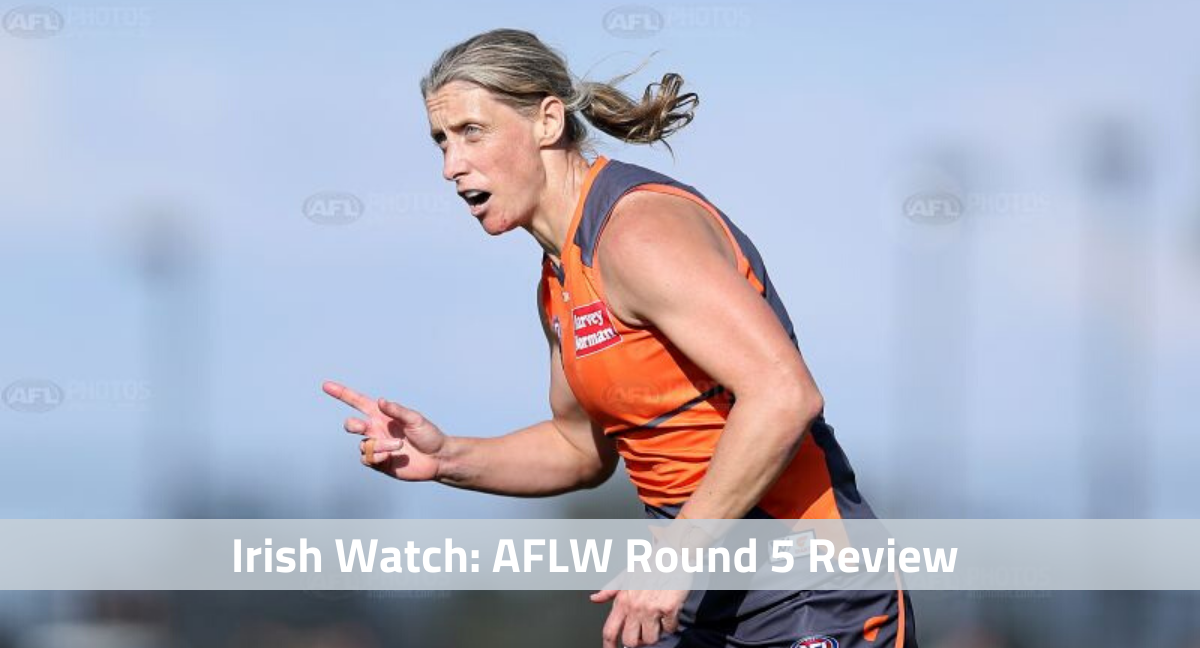 It was a defining weekend in the AFLW as an action packed round saw some teams pull away towards finals actions and others plummet to the bottom of the standings.

The headline would be the heroics of Irish veteran Cora Staunton, or Four-ton, as she starred up forward for the Giants in their big win against the Tigers with four majors and a best on ground performance.

We also saw a number of our Irish girls take their games to the next level and really solidify themselves in their respective teams as we head into the pointy end of the season.

North Melbourne claimed the top spot in conference A with a statement win against reigning premiers Adelaide at North Hobart Oval.

Leading from start to finish, the Crows were simply no match for the slick Kangaroos as they destroyed them inside the contest and burnt them on the outside to claim a 42 point.

After impressing last week against Gold Coast, Irishwoman Aileen Gilroy continued her good form with another solid performance across half back.

Picking up 12 disposals and four marks, Gilroy continues to look more and more comfortable at the level as she constantly looked to take the game on and use her skills to set up North’s ball movement.

It was a big day for GWS, who did their finals chances no harm with a big win against cellar dwellers Richmond in Wagga Wagga.

Dominating from start to finish, GWS were quick to get over the disappointment of last week and buried the inexperienced Tigers with their work around the contest and ability to get out and spread.

After struggling majorly last weekend, veteran champion Cora Staunton responded in a big way with a best on ground performance.

Moving into the forward line, Staunton was on fire from the outset slotting a season high four goals and becoming the Giants real focal point in attack.

However it wasn’t just her ability to hit the scoreboard that made her so valuable, as she was constantly around the footy picking up 11 disposals and applied outstanding pressure laying six tackles. 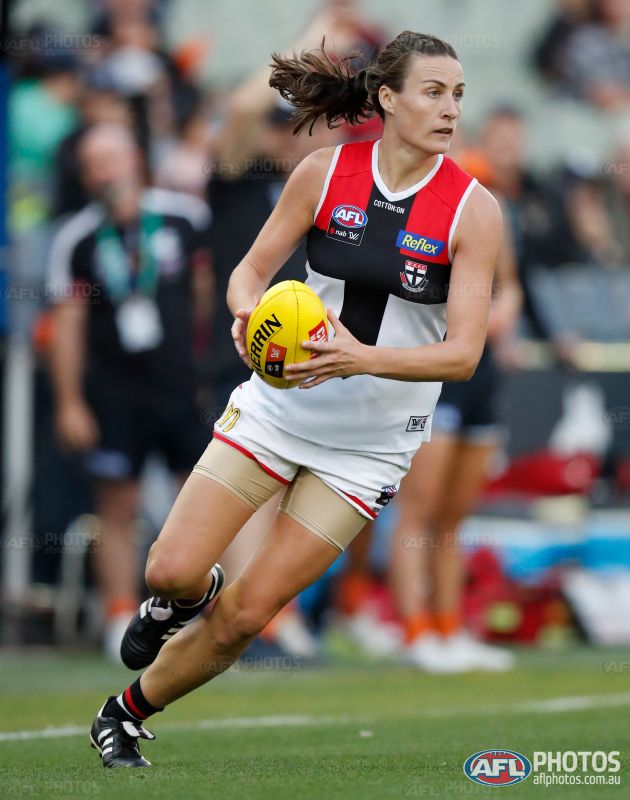 Carlton continued their good form with a big win over St Kilda at Ikon Park on Saturday night.

After a tight opening half, the Blues really hit their straps in the third term piling on three goals to none to put considerable distance between themselves and the hard battling Saints.

Despite going down, the Saints would be buoyed by the return of Irish key defender Clara Fitzpatrick from a nasty concussion sustained against Adelaide three weeks ago.

Slotting straight into the Saints defence, she was as solid as ever playing a shut down role on the dangerous Tayla Harris, who could only muster one solitary major.

Along with her work defensively, Fitzpatrick worked hard the other way picking up 12 disposals, two marks and two tackles, showing her versatility as a key defender. 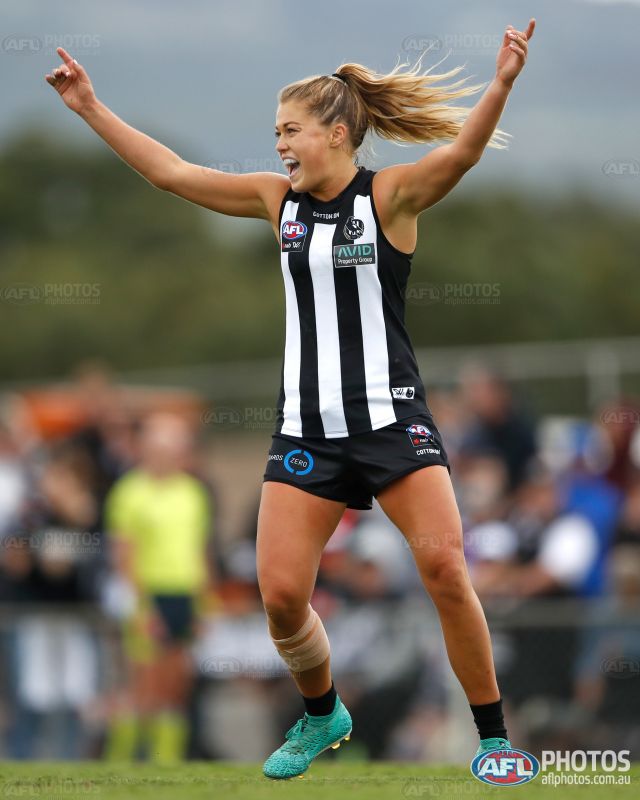 Collingwood claimed a much needed win over the struggling Western Bulldogs on Saturday night to keep themselves in the Conference B finals mix.

After a poor showing on the bright lights of Marvel Stadium last week, the Pies came out swinging kicking four goals to none in the first half to essentially seal victory.

Collingwood would keep their foot on the pedal for the majority of proceedings, with their best four quarter performance of the season yielding an impressive 32 point victory.

Sarah Rowe continued her dominant season with perhaps her best performance yet against the Bulldogs.

Playing through the midfield and pushing forward, she was a constant headache for the Dogs who had no answer for her work around stoppage and speed on the spread.

Picking up 21 disposals, five marks, two tackles and two goals, it was a well rounded performances by one of the competitions most damaging midfielders.

Melbourne chalked up the biggest win in their history in a 66 point rout of the West Coast Eagles at Casey Fields.

Clearly dominant from start to finish, the Demons looked every bit a flag contender as they gave West Coast an eye opening afternoon at the office.

Now sitting second in conference B behind the Dockers, Melbourne will be looking to continue on this good form and build a really solid base heading into the finals.

Niamh McEvoy enjoyed a career best afternoon at Casey Fields on Sunday as she really shone in the dominant Demons forward set up.

Picking up 14 disposals, one mark and five tackles, McEvoy showed herself to be a valuable small forward with her pressure simply outstanding all day.

She would also prove her worth around the sticks, as she cleverly roved a pack and slotted through a nice goal to add to what was a triumphant day for the irishwoman. 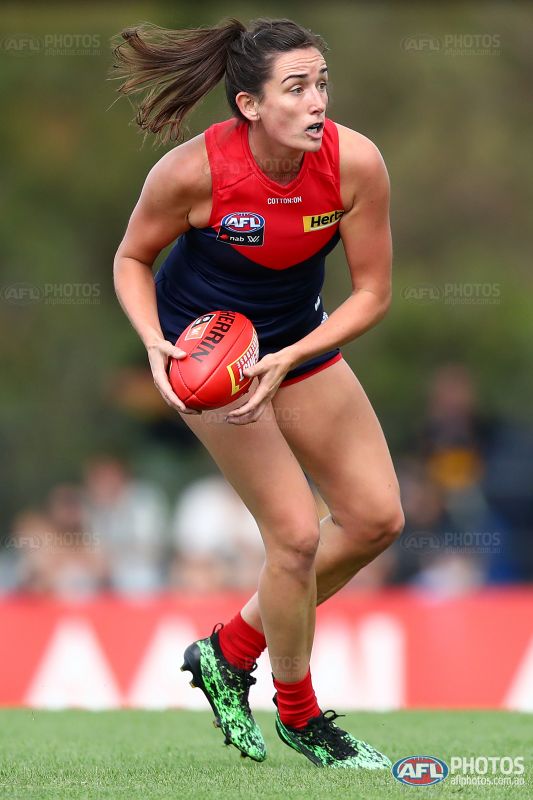 Fremantle continued their undefeated start to the AFLW season in a top of the ladder clash with Brisbane on Sunday afternoon.

Built up as the game of the round, the Dockers were up for the fight from the beginning with a scintillating five goal first quarter.

Opening up a three goal lead at quarter time, Fremantle would keep the Lions at an arms length for the rest of the match, cruising to an 18 point victory.

Despite being on the losing side, Brisbane forward Orla O’Dwyer continued to show her immense talent with another solid performance.

A real force inside the Lion’s attacking 50, O’Dwyer would constantly make the opposition defenders sweat, with her speed and athleticism causing problems all day.

Playing a bit more up the ground, O’Dwyer would pick up 11 disposals, two marks and two tackles with her knowledge of the game and comfort out on the field becoming more and more apparent each week.