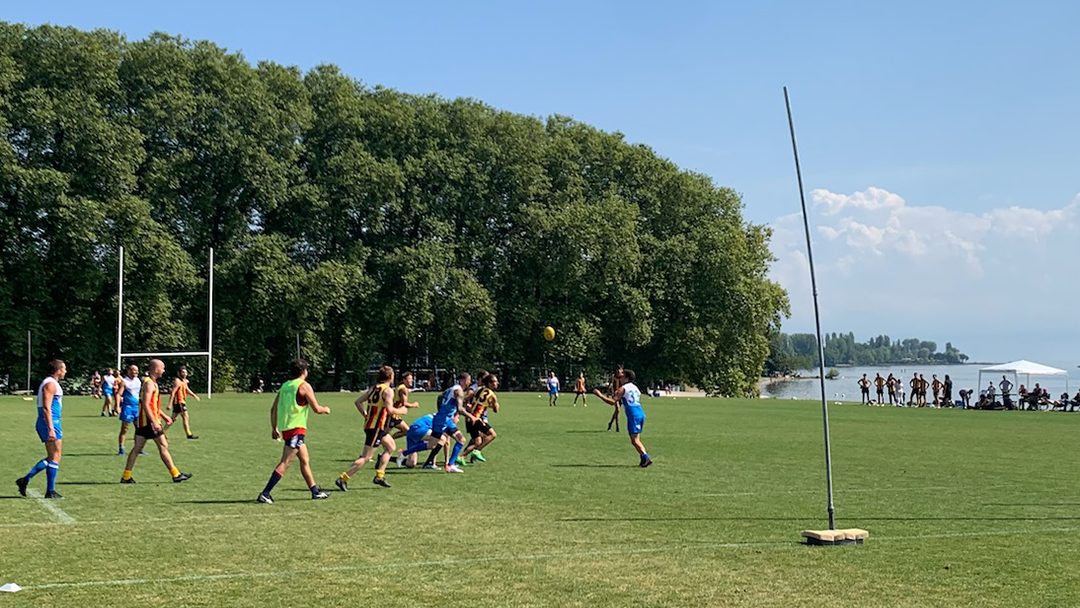 The fourth and final round of the AFL Switzerland, hosted by the Geneva Jets at a beautiful ground by the Lake of Geneva, has finally determined which two teams would progress into the Swiss grand final. Read the full review of round four and a finals preview thanks to Keelan Seen from AFL Switzerland.

The hosts from Geneva took on the Winterthur Lions in the first game of the day and well, playing against a fresh Jets side is never easy. There were also some last-minute emergency list changes for Winterthur as some of their players got up a little too late for the long drive down to Lausanne. Nonetheless, the Lions knew what they had to do.

The Lions had to manage their percentage going into the game against the Jets if they wanted to make it into the grand final. But of course, the Jets had their own agenda, and it was relentless.

With a full squad and some new young guns coming in, the Jets once again proved dominant. Whilst the Lions were winning most of the hit-outs, it was the hard running and great link-up play from the Jets that helped them to a big win in the first match of the day. In game two, it was the Giants who took on the Jets. Just like the Lions in the previous game, in order to make the grand final, the Giants needed to win or preserve their percentage.

Right from the start of the game, the Giants seemed the stronger side. They were outrunning their opponents and hitting up their teammates perfectly. The Jets seemed exhausted from their first game and couldn’t keep up with the Giants at all in the first half.

It seemed that the Jets would finally be beaten for the first time since 2019, when the mighty Basel Dragons defeated them in round one. Well, in the last five minutes of the game, that all quickly changed.

Suddenly, the Jets seemed to wake up and started playing their well-known ruthless footy. By kicking a couple of late goals, they managed to turn the game on its head.

Congratulations to the Jets on making their third consecutive Grand Final and ending the season undefeated! The final seniors match of the day was going to decide who would face Geneva for the premiership, held in Basel today. However, after the Giants incredible performance against the Jets, the Lions had to not only beat the Giants, but do so by a big margin.

Of course, the Giants were a bit out of breath after their game against the Jets but they are still a very strong side, so it really promised to be an interesting game. The Lions went in hard for the early clearances and got a lot of the ball.

While the Giants defended very well, there was one man they could not defend. Lions full forward Jacob Brownley was clunking everything out of the air and was very reliable with his kicking too. At half time, the Lions led by 23-points and their hopes of playing in grand final were very much alive.

The Giants switched up some of their positions in the second half and seemed a lot better organised. Both teams were scoring goals and it was a great game for any neutral spectator to watch. However, for everyone playing it was nerve-wracking.

In the end it was a great win for the Lions but thanks to their consistency throughout the season the Giants remained ahead on the league ladder by percentage. Once again there was a great turnout for the reserves game with many new faces on both sides. It was the Jets with their young core of players who seemed fitter but there were a lot of really good passages of play for both sides.

Both teams managed to share the ball around and get their teammates into the game. Every possession had to be fought for and the intensity was no lower than in the seniors games beforehand.

It’s really exciting to see not only the talent developing on both sides, but also the fantastic attitude that all the players on the ground had.

And that’s a wrap for the home and away season in Switzerland! The third ever AFL Switzerland Grand Final will be held on Saturday, September 18th in Basel. We’re all looking forward to it and can’t wait to get back out on the field again.

Details about the grand final can be found here.

Where to watch the AFL Grand Final in Europe