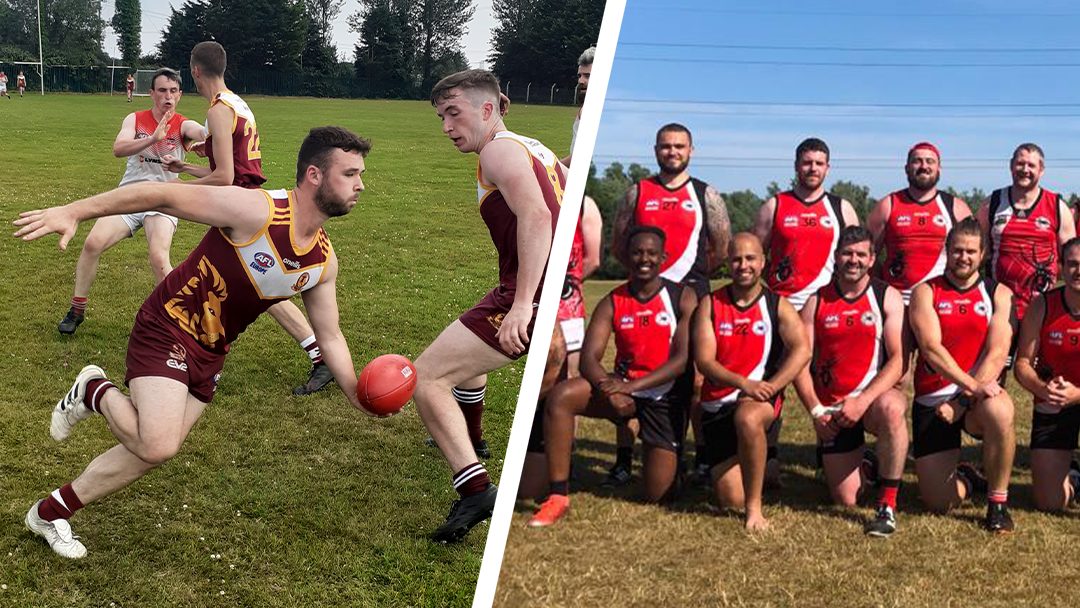 Round four of the AFL Ireland men’s competition is underway this weekend but first, recap all the action from round three thanks to Reporter for AFL Ireland, Stephen O’Sullivan.

Another two games were played at either end of the country for round three of the AFL Ireland Men’s Premiership on the second last Saturday of July. The South Dublin Swans travelled south to face the Leeside Lions in Cork, while the Galway Magpies made the trip north to take on the Belfast Redbacks.

The top of the table clash down in Delanys GAA Club in Cork was set to be a mouth-watering affair. Much like previous meetings of these two clubs, it lived up to the billing. Both clubs came into the game on the back of perfect starts to the campaign. However, the first away fixture for the Swans was to be their most testing to date. The game got underway in glorious sunshine in Kilbarry. It was the visitors who performed well at the stoppages early on, with the likes of Dillon Browne on the end of many taps from Andrew Baldwin, the tall Aussie deputising in the ruck.

The Lions drew first blood however, with the ever impressive Darren Dwyer scoring early on to set the pace of the game. Stephen Boyle, with his first goal for the Dublin side, responded in a quarter which seesawed right the way through. The Lions would take the lead going into the first break.

The second term saw the home side turn the screw. Kevin Jones, the impressive Lions midfielder, was a constant thorn in the side of the Swans and he began to see a lot of the pill as the second term progressed.

James Hegarty and Jerry Cronin formed a good partnership down back for the Leesiders, while the experienced Paul Murphy acted as sweeper in front of the defence. This kept the Swans somewhat quieter in the second term, as the Lions forwards went to work.

A score of 61 to 33 in favour of the home side concluded the first half. The Swans rallied and came out fighting in the third. Buoyed by the return of Declan Morgan who had a fantastic game in the middle for the Swans, the visitors tried to mount a comeback. The tireless Keith Wheelan grabbed his first goal for the club which was reward for his hard work throughout. Stephen Boyle added to his tally while Dan Matveyeff scored an outstanding goal from the sideline.

The task for the Dublin side was too much to ask in the final term.

The Lions regrouped and only for some inaccuracies in front of the big sticks, could have been out of sight much earlier. Padraic O’Connell, who scored three on the day was at his tricky best in the final term and could have had more with some speculative efforts from the pocket that went through for behinds.

The hardworking Swans went to the final whistle as they put their bodies on the line all day but the quality from the Leesiders told on the day. A quality game that saw the two sides produce a hard fought game and no doubt will do the same when they meet again in September. Having had their round two clash with the Leeside Lions postponed, the Galway Magpies would head to Belfast for their second game on the road. Both sides knew that a win was a must to keep them in contention with the sides at the top.

The home side started strongly and in truth never looked back. Knowing what was at stake, Dean Skinner and Kyle Devine led by example in the forward line. The two bright sparks from their round two clash in Dublin continued their form into round three. It was somewhat of a goal kicking competition between both on the day. The Aussie, Skinner, pipping the Tyrone man in the end; ten goals to Devine’s eight.

David McElhone, who missed the trip to the capital in round two, was back and in fine form once more in the centre of the park. The Redbacks stalwart adding four goals to his own illustrious goal scoring tally.

The Magpies, who have added a lot of new recruits to their ranks this year, can put this down as a learning curve. They were never really in this game but there will be plenty of games left in the year to make their mark on the premiership yet. This game will give the Belfast side a lot of confidence going into their next game as they travel to face the undefeated Leeside Lions.

The Magpies will have to pick themselves up and get back in the race as they host the Swans in Galway, and no doubt they will, as they can expect to have a full compliment of players for their first home game of the season.

A whitewash in Belfast in the end.