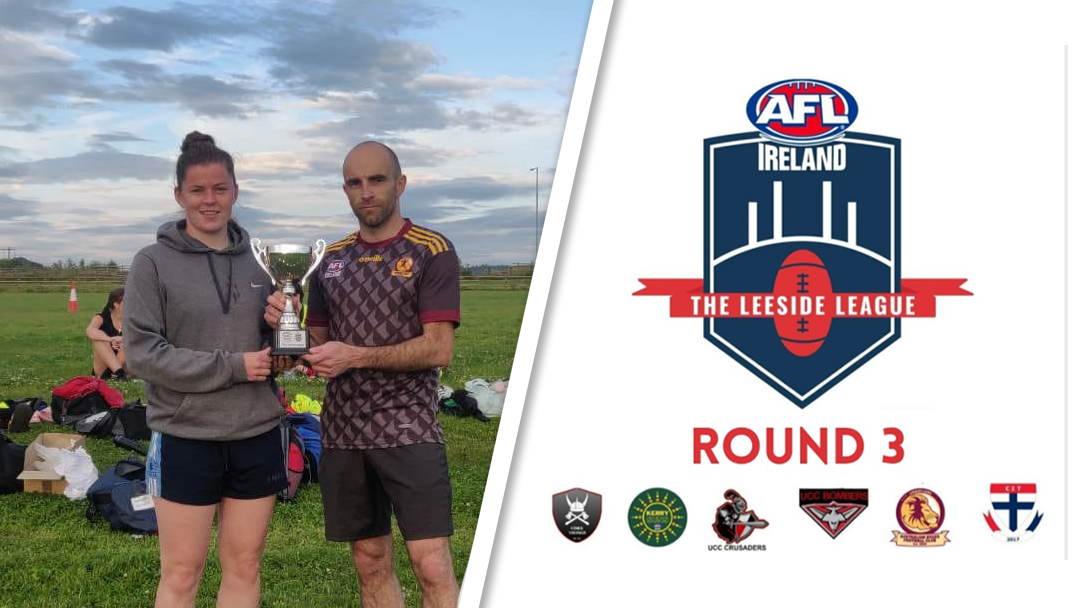 The final round of the Leeside League took place last week, with Killarney Rugby club playing host to the night’s action. Stephen O’Sullivan, Country Reporter for AFL Ireland, recaps the action from round three as the teams now prepare for Ireland’s 2021 premiership season.

The first game of the evening saw the Kerry Suns taking part in their first official home game as a club. Knowing that only a comprehensive victory, (along with a narrow win for the Lions in the other game) would be enough to claim the trophy, the Bombers came out firing.

Racking up seven goals (42 points), the Cork side blew their hosts away. The Suns, with their first three home goals in competitive action, can be proud of their efforts over the last three weeks. They have been a brilliant addition to this new four team format for 2021. The Bombers would now have to wait until the final game of the evening to see if their victory would be enough to take the title.

The third and final game in the women’s series was set up for a cracking finale. The Vikings had taken the win in the first round two weeks ago, however the Crusaders hit back to level the series up in round two.

Both teams had their sights set on the first Leeside League women’s title, and it didn’t disappoint. The first quarter was a nip and tuck affair with both sides trading blows, the Vikings edging it four goals to two. It was the second quarter in which the Vikings asserted their dominance, notching up another three goals without reply. It became an uphill battle for the Crusaders from then on.

The last two quarters were tight, but ended with the Vikings kicking five to the Crusaders four goals therefore earning them the title. Annie Walsh kicked six goals on the night for the Vikings with Amanda Brennan getting three of her own as the Crusaders’ top scorer on the night. Congratulations to the Cork Vikings on their maiden Leeside League. The final game on the night was the men’s competition league decider. The Lions knew that they would not be crowned champions as the Bombers had won heavily earlier in the evening, however, they could spoil the party for the Saints, who knew a win or a draw would be enough to claim the spoils.

The Lions threw a spanner in the works early on as they came out firing, aiming to dash their rivals hopes of claiming the title. To their credit, the Saints rallied and clawed their way back, setting up a pulsating finish in the Kingdom. With the Lions leading by five goals to four with only moments remaining, the Saints mustered up and levelled, leaving the sides tied on 30-points apiece. It proved to be enough to claim the draw and in that, gave the Leeside League to the Saints.

A massive effort by the Saints, meaning they were unbeaten throughout the three game series. Congratulations on an impressive victory in what was a captivating Leeside League over the past three weeks. Overall, the Leeside League had six teams compete over two competitions. A total of 110 goals were kicked by 33 different players. The women’s tournament has been a massive success, with over 20 players taking part. Congratulations to the leading goal kickers in both competitios; Darren O’Dwyer of the Bombers kicked eight goals over the three weeks, while the Cork Vikings’ Annie Walsh led the scoring in the women’s comp with ten goals.

A fantastic Leeside League culminated in a gripping final round down in the south west. With quality footy and high numbers yet again this year, it is sure to continue as a highlight of pre-season on the AFL Ireland calendar.

Attention will now turn to the AFL Ireland Premiership campaigns which begin this coming weekend.