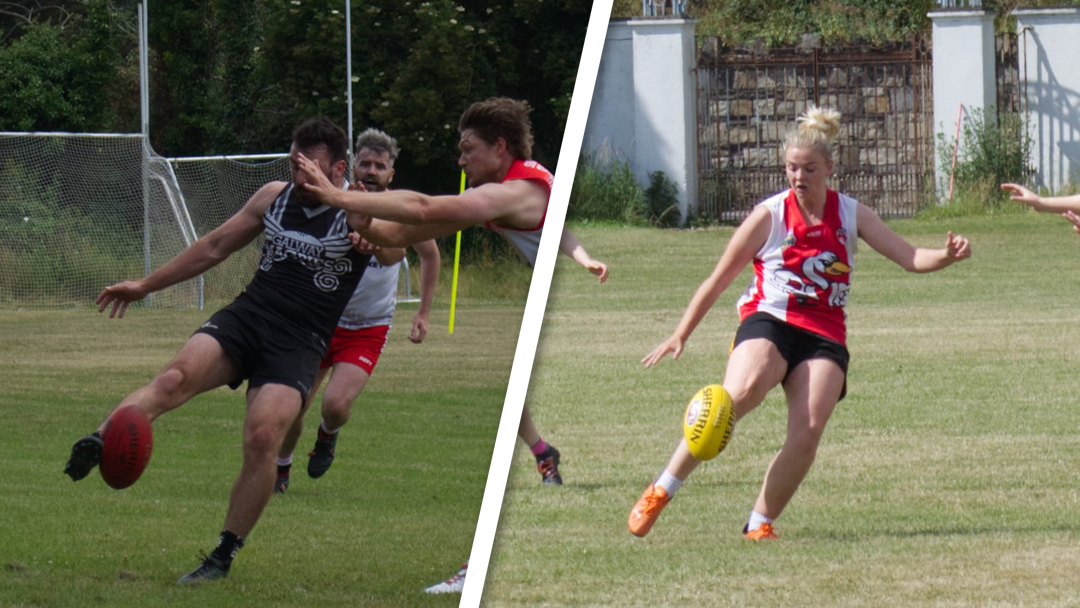 Stephen O’Sullivan, Reporter for AFL Ireland, reviews all of the round one action from the men’s and women’s 2021 premiership competitions that kicked off last weekend.

The Vikings travelled north to play the Ulster Kookaburras in Belfast on Saturday on the back of a successful Leeside League campaign. The Cork women were hoping to bring that good form into round one of the AFL Ireland Women’s Premiership.

The Kookaburras on the other hand boasted an impressive squad list for their first home game of the season, with 20 players named as part of the playing group for round one. It was the Ulster women who found the route to victory through effective use of their interchange bench. There were eight different goal scorers for the Kooks, with Eva Cafolla top scorer for the home side on the day, notching up three majors. Siobhan Sherrin was another player who got on the scoresheet, with two goals of her own. A player with a familiar name in AFL, Sherrin was one of the best players on the ground with her score involvement and all round play.

Annie Walsh, having snagged top scorer in the Leeside League, continued her red hot form for the Vikings. She bagged multiple goals for her side who to their credit, tried to keep pace with their formidable Ulster opponents. Shannon Stevenson managed five goals of her own for the Cork outfit, which will no doubt give her and her team plenty of confidence going into round two. The Kooks were too good on the day overcoming the ladies from Leeside by 25-points. Other notable performers were Leah Casey, Aoife Halligan and Annie McCole.

On what was a historic occasion last Saturday afternoon, the South Dublin Swans and Galway Magpies took part in their first ever competitive game in AFL Ireland Premiership competition. The Magpies, as a tier 2 club, are in their development stage so will participate in 9’s tournaments and development games as part of the 2021 season.

St Brendan’s GAA club in Dublin was the venue for the inaugural meeting of these two teams. The sun shone bright in Dublin on Saturday, and so did some future stars of women’s Australian Football in Ireland. It was an 8 v 8 contest, with the Swans women rotating between teams throughout. Both sides traded scores, with tough tackling being the theme of the day. Sorcha Nolan and Jane Leahy were the sharp shooters on the day, racking up six and four goals, respectively. Tanya Farrell, Sarah Mullins and Karen Lawlor were impressive as the first three Galway representatives of the season. Karen kicked two goals of her own for the game.

Special mention to Ashling Hanley for the Swans, who was voted best on ground in her first game of Australian footy. Maria Jose was fierce with her tackles all day, and Angie Crispe showed exceptional ball use.

Overall it was some fantastic footy played in testing conditions in the capital. Exciting times lie ahead for both clubs if round one is anything to go by.

A great opening weekend of women’s action with fantastic skills and hard tackling on show. There is plenty more to come this summer as the sides look ahead to round two. The Vikings will travel to face the Galway Magpies while the Kookaburras will be on the road to face the South Dublin Swans. The Magpies travelled east to Dublin in round one for the second year in succession, to face the South Dublin Swans last Saturday afternoon. It was cool and overcast as the teams went through their pre-game preparation, but it quickly warmed up, both weather wise and on the field.

The Pies, with a new look team including ten debutants, came out firing early on with a goal in their first inside 50. Taking advantage of the breeze in the first quarter, they added a further two goals. Behinds were the Swans first five scoring contributions, before finally kicking a goal at the end of the first term. The home side came out firing in what was their best quarter of footy on the day. Four goals were kicked by the hosts before the big break, who seemed to take control of the game going into the second half.

The third quarter was a seesaw affair, with both teams trading scores. Shaun ‘Smurf’ Murphy was at his formidable best throughout, splitting the big sticks with ease to keep the pressure on the Swans.

The final term saw the Galway team bring the scoreline back to within one-point of their Dublin rivals. Again, Smurf was the thorn in the Swans side as he was the prime target for the Magpies hardworking midfield. Rory Quinlivan, Keith Wheelan and Conor Dunne then found another gear, re-taking control of the game for the Swans, who kicked two goals in the last few minutes, including one from James O’Donoghue, to secure the victory.

A highly entertaining game which saw tireless running and great ball work from Steve McCarron from the Magpies and pinpoint accuracy from Shaun Murphy.

Best on for the Swans were Keith Whelan and Conor Dunne in the midfield, along with new recruit, Rory Quinlivan in the ruck. The Leeside Lions made the cross country journey to Ulster’s capital city last Saturday for round one of this years Premiership. An 840km round trip would seem arduous but not for the club that plays out of Cork. A total of 24 players made the trek to Belfast. Serious dedication from the Leesiders who were looking to restart where they left off last season.

The Redbacks enjoyed a healthy pre season, buoyed by the resurgence of their ladies team, the Ulster Kookaburras, and the development of the Mid Ulster Suns, which saw the Redbacks get mixed training sessions and challenge games under their belt.

The Redbacks had plenty of motivation for this one, looking to avenge last seasons heavy defeat down in Cork. It was the Munster men however, fresh from their three game Leeside League series, who managed to get the upper hand in a low scoring game.

Ian O’Sullivan, the Lions engine in the midfield, rolled back the years with an impressive display, notching two goals in the process. The impressive Darren O’Dwyer snagged two goals of his own to add to the top scorers award he won in the Leeside League competition just one week prior.

For the Redbacks, it was a tough day at home in the Mallusk Playing fields, but their effort as always, cannot go unmentioned. The tough tackling Ulster men never give up and Saturday was no different, pushing their rivals until the final siren. Redbacks stalwart Davy McElhone is worth a notable mention as he put himself about with some quality use of the footy and great disposals.

Best on ground in Belfast were Jerry Cronin in the backline for the Lions, Kevin Jones in the midfield and Belfast’s David McElhone.

Attention will now turn to round two on July 17th as the Swans host the Redbacks in Dublin and the Lions, who are on the road again, travel to face the Magpies in Galway.