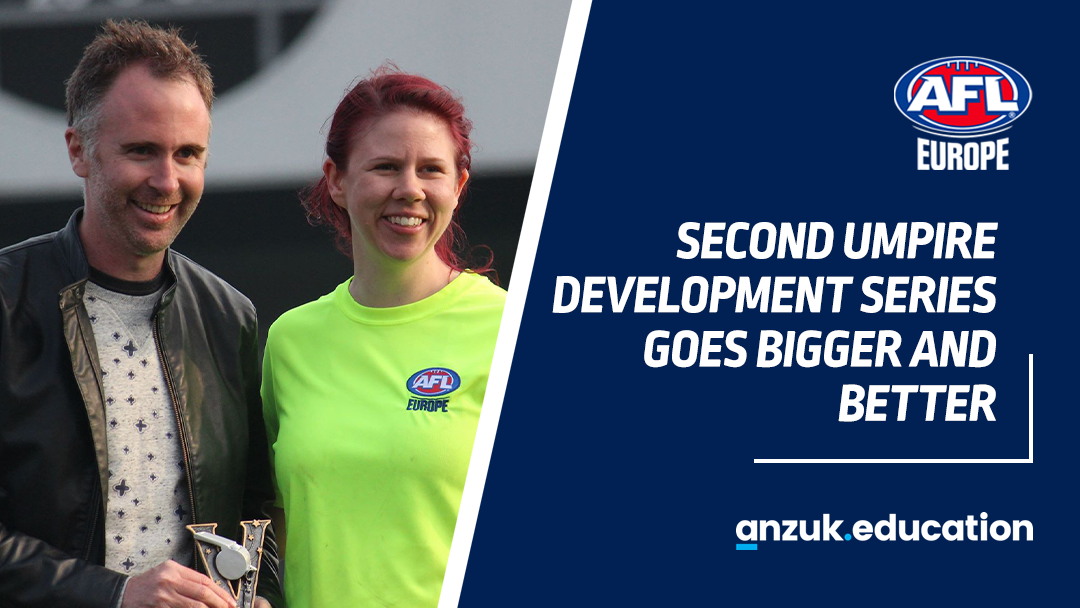 AFL Europe’s Umpire Development Series with anzuk Education has come to a close for 2021.

The program consisted of four 60-minute online sessions and ran weekly throughout the month of April.

We were thrilled to see more than 140 umpires from across Europe attend the program, with an average of 125 present each week.

We’re also pleased to share that 100 of these umpires, who attended every session, will be officially recognised by the AFL as an umpire and receive umpire accreditation. The Umpire Development Series is aimed at developing all current and aspiring Australian Football umpires from across Europe.

Led by some of the most experienced umpires within the AFL Europe Community, this year’s series covered the topics of the role of each umpire, communication, laws of the game and positioning.

AFL Europe General Manager, Ryan Davey, expressed his gratitude to all umpires and the importance they play in the growth of Australian Football in Europe.

“All of the participating countries across Europe recognise the significant role each umpire plays and are always on the search for more people to get involved in umpiring,” said Davey.

On Wednesday we held our fourth and final session of our 2021 #UmpireDevelopmentSeries with @anzuk_UK.

A big thanks to all umpires who attended over the four week's and for your commitment to help growing footy in Europe! pic.twitter.com/7R5yO5hPu0

“We’re absolutely thrilled that for two years in a row now, this program has introduced a significant number of new umpires to the game, and also up-skilled those who have officiated previously.

“AFL Europe are extremely fortunate to have Kat, Dan, Jack and Adrian lead the 2021 series from start to finish and share their knowledge and experiences with our umpires who attended the program.” A massive thanks and congratulations goes out to our four presenters; AFL Europe Umpiring Coordinator, Katrina Stopinski, and senior AFL Europe umpires Daniel Wild, Jack Murfett and Adrian Masterman-Smith, for developing and leading such a highly engaging and informative series.

We’d also like to thank our Education Partner, anzuk Education, for their ongoing support which has enabled us to run this series for a second year in a row.

The entire AFL Europe Community appreciates the effort and dedication shown to the sport by all of our umpires and we look forward to seeing you all officiating matches as soon as possible.

An Australian footy-first for the town Nysa, three-team tournament this Sat...
Scroll to top