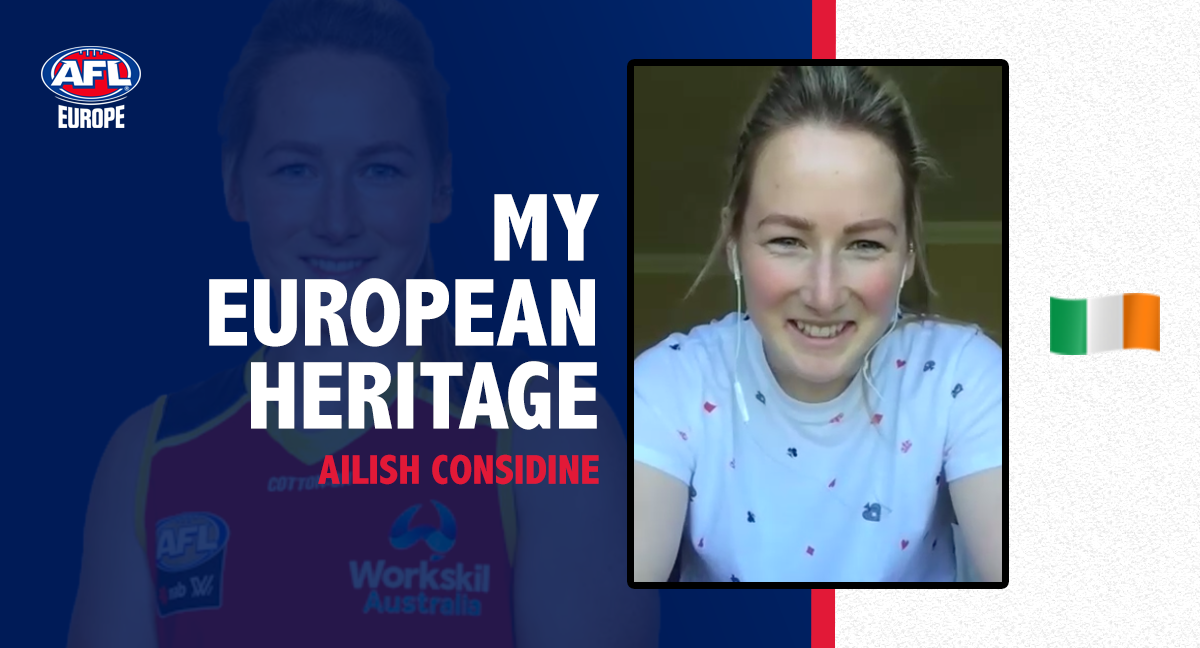 GROWING up in West Clare, Ireland surrounded by empty fields, Ailish Considine lived a childhood that many kids would dream of.

“We played Gaelic football, soccer, hurling, basketball at school, volleyball, baseball, tennis… whatever sporting equipment we had really, we played.”

Considine and her older sister experimented with every sport they could, which often led to the two going head-to-head with one another.

“Sport had always been a major part of our childhood and yeah we were lucky we had each other to practice with.

“She was the athletic one whereas I had the skill side… don’t ask me to run!” 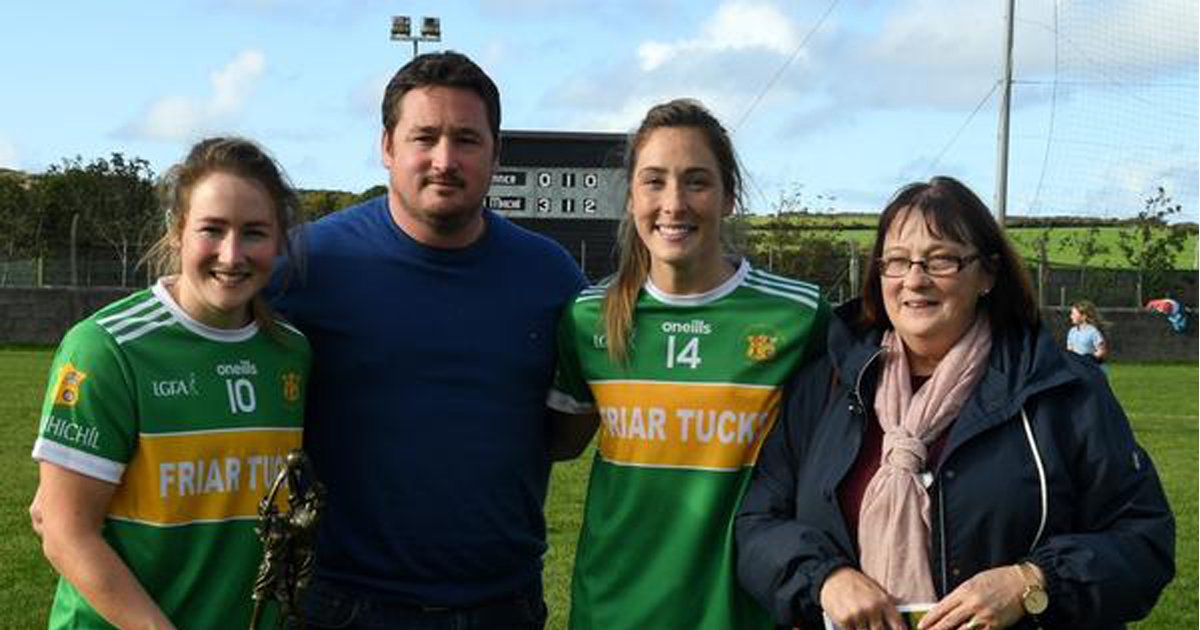 Considine (left) pictured with her family.

However, there was one sport growing up that Considine never quite got her hands on, the sport that is Australian football.

Whilst she knew of Australian footy through seeing glimpses of it on TV, as well as the International Rules series, it wasn’t until late-2017 where she was introduced to the sport by Mike and Rosie Currane.

“I was lucky enough that Mike Currane had set up AFL Women’s here in Ireland, which I found through playing (Gaelic) football with his sister.

“He (Currane) had set up a tournament and wanted to get as many teams as possible to it. His sister Rosie (pictured below) said will you come play, and I thought I may as well.”

From the get-go, Considine fell in love with the sport and the talented Gaelic footballer became well-known amongst the AFL Europe competition.

“We went to Amsterdam at the start of 2018 and won the Champions League, and it just kept growing from there.”

Considine and West Clare Waves would experience large success, going on to win almost every game they played that year.

Just months into a new sport where she was still unsure of what all the rules were, her sister would forward on to her an email that would change everything.

“My sister sent me an email about this CrossCoders program, asking if anyone was interested in playing Australian Football or wanted to come to Australia and trial for it.

“You just had to express your interest with your email and then list your previous sporting achievements.

“I threw my name in the hat for the one and only reason to go over to Australia, see it and then come home and play (Gaelic) football because I really had no notion of getting picked up.” 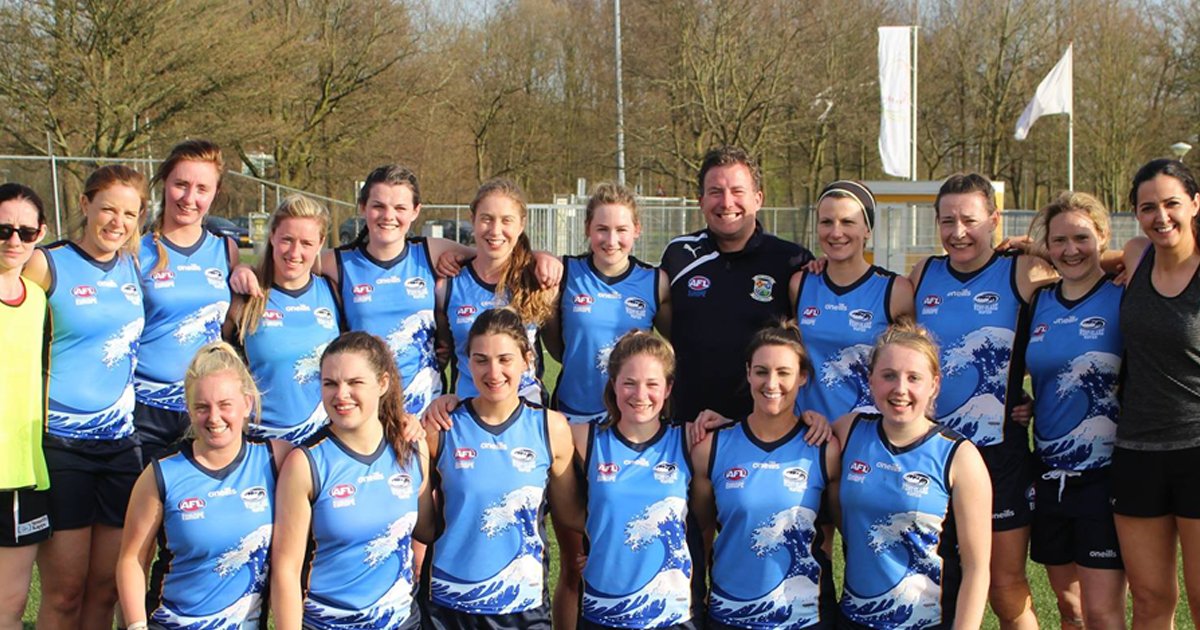 Time went on and Considine later found her submission had drawn some interest, as CrossCoders were now asking her to send on a few videos in action playing Gaelic and Australian Football to show AFLW teams.

“I was then lucky to get a video call with the Bulldogs and I got picked to make the trip… I was delighted! It was a trip out to Australia, with the opportunity of a lifetime.

“I didn’t think anyone would pick me over the calibre girls that were going over. Some of the girls going over were serious, inter-county football stars.

“But just like that I headed out to Melbourne, and that was all thanks to AFL Ireland, AFL Europe, Mike Currane and everyone else that started me off in playing AFL over here (Ireland).”

Considine said her time in Australia flew by, spending 10-days in Melbourne playing games alongside Irish teammates, meeting and trialling with AFLW clubs and watching the Victorian Football League finals.

“We started the training and testing, Adelaide Crows were there, Collingwood, Western Bulldogs and a few other clubs. 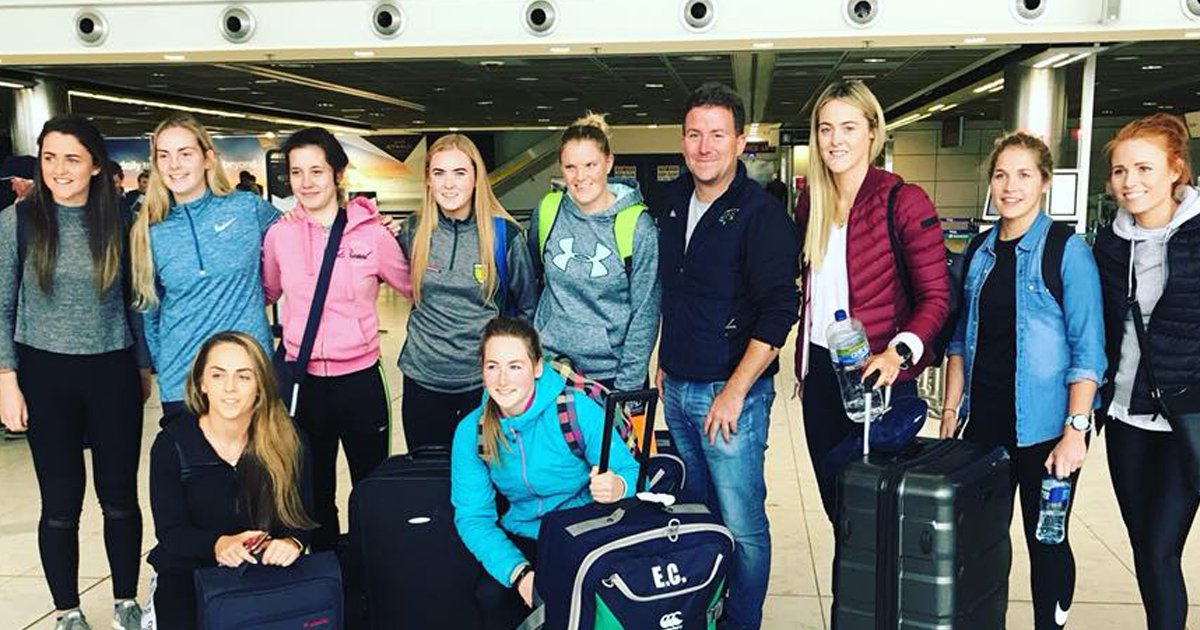 Ten Irishwomen embark on a trip to Melbourne to trial for the AFLW. Considine pictured front/centre.

“The Crows seemed to show a bit of interest pretty quickly, and Mike was telling me they were looking into me but I thought he was only telling me that to make me feel better.

“We had an interview with Phil Harper & Katrina Gill at the Crows… it went pretty well, it was just a general chat and they told us they were looking into a few of us.

“The following morning we had interviews at 9AM, and I remember going into that interview with the Crows and thinking they’re not going to pick me anyway so I’ll just have a nice chat with them.”

The Crows spoke with Considine about her life in Ireland, her family and growing up being surrounded by sports.

“It was probably one of the nicest interviews I’ve ever had.”

Moments later, an unexpected surprise would soon change her life.

“I was just sitting there speechless, is he asking me this just to show me the guernsey or is he offering me a contract?

“Mike was sitting beside me and thank god because most of it was going over my head because I just didn’t believe it was happening.

“He (Phil) was like well we think you’d look pretty good in it and we want to offer you a contract.

“I went out to Australia, and did not expect a contract coming home. My mother was even preparing for how she was going to console me once I got back.

“Mike was smiling ear to ear and he knew what was going on. I couldn’t get over it, and I was like this is just not happening, it’s not real.”

From there and then, Considine would come to learn that she was going to be back in Australia living out a professional career in the AFLW.

But first, she had some unfinished business with Australian football in Ireland. 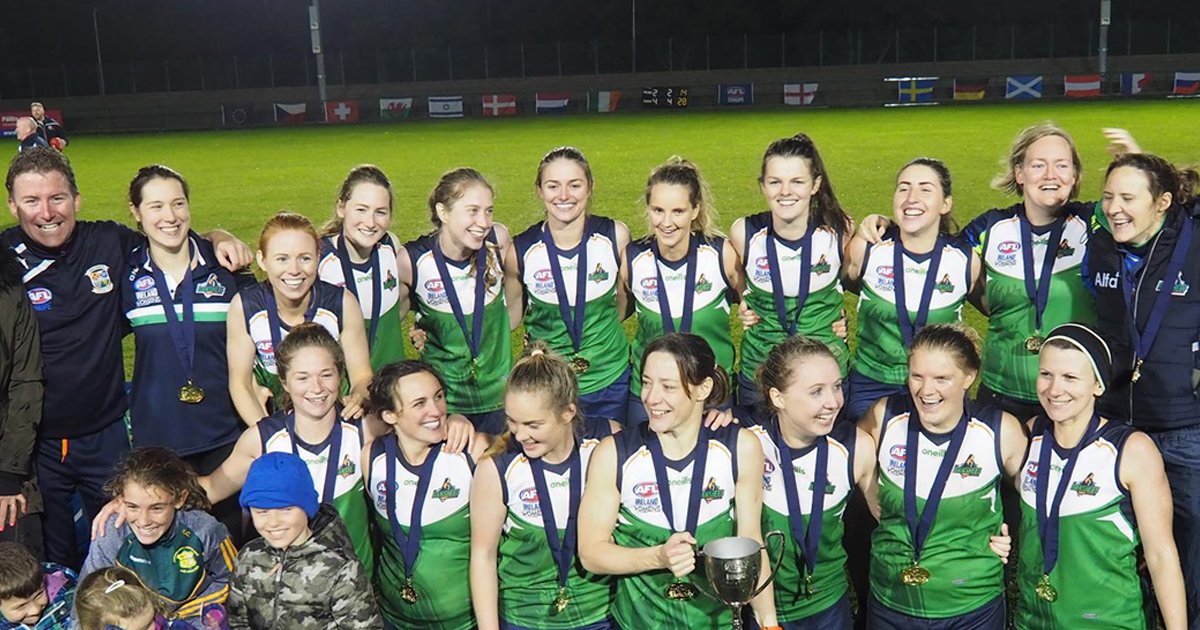 Irish Banshees at the 2018 Euro Cup. Considine pictured back, third from left.

Once returned and in that following October, she would head down to Cork to represent the Irish Banshees at AFL Europe’s Euro Cup.

Considine believes her time with AFL Ireland (pictured with Mike below) and playing in AFL Europe had prepared her extremely well for her move to Australia to compete in the AFLW.

“It definitely really helped me to start me off and get me to certain level, and then obviously get recognised by the Crows… I think getting involved over here (Europe) is a good starting point for anyone that wants to pursue it (a career in the AFL/AFLW).

“It gave me a good base of how it’s played, and then obviously the basic skills, learning where the ball was going to bounce, judging the flight of the ball, even getting used to the tackling.”

Considine’s winning ways would soon follow her into Australia, capping off her first season in the AFLW with the Crows by winning the 2019 premiership in front of 53,000 fans.

Within one year, Considine had become one of the most decorated Irishwomen in the game, having won AFL Europe’s Champions League, Euro Cup, and now, an AFLW grand final. 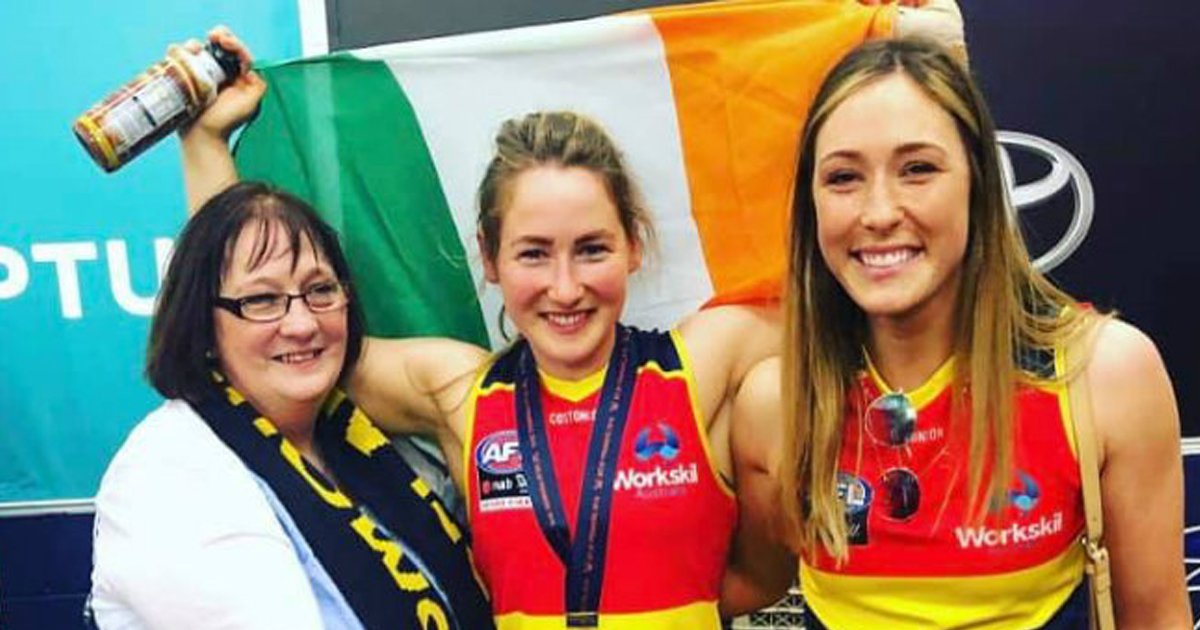 Considine pictured with her mum and sister after the 2019 AFLW grand final.

Her remarkable journey also makes her one of the first players to have competed in the AFL Europe system, to then sign on with a professional club in Australia.

In her first season with the Crows, she managed to only miss one game and credits those who took the time out of their lives to help her work on her skills, but also support her with settling into Adelaide.

“They (Adelaide Crows) had really made me feel apart of the family, I had flown how many miles across the world not knowing a single person in Adelaide, and literally didn’t feel homesick at all in my first year.

“They flew me home at Christmas, made sure I felt safe and at home with the club and really looked after me.

“I just learnt so much and got so much support from the coaches, and Phil Harper in particular.

“We used to train Monday, Wednesday and Friday, and then on a Tuesday and Thursday Phil and I would go kicking for an hour or two at the oval. It really helped me so much.

“I had all the support I needed and was just full-time into my footy.” 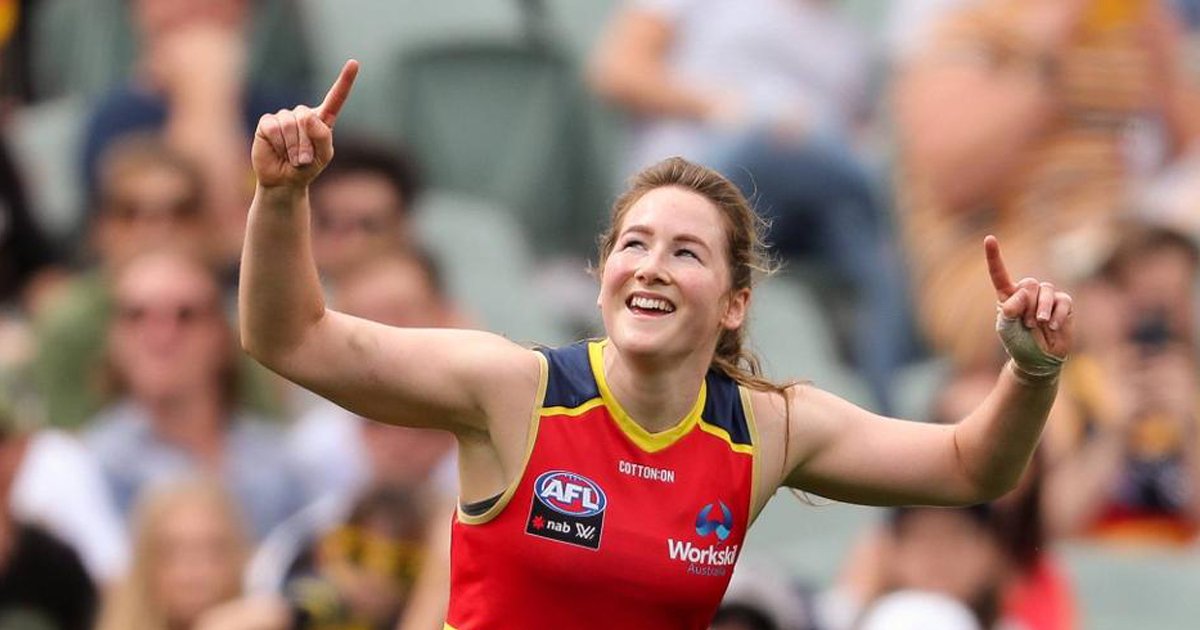 Considine celebrating with the Adelaide Crows.

A dreamlike introduction into the league led to an eager Considine raring to get her second season underway, but not all things were perfect for the Irishwoman.

“In my second year I actually felt a bit of homesickness which was a surprise, I knew Adelaide, I knew the players and I knew what I was going into.

“I got dropped for one of the games and I think Katrina Gill knew it wasn’t just the ‘being dropped’ that was why I was down, and she just said do you want to go for a coffee… little things like that do really go a long way.

“The club have been great like that, they really make an effort to reach out when something’s up.”

It’s one of the biggest challenges that international recruits have to deal with when making the move to play in Australia.

“And to be honest, reaching out to people is something that I find very hard to do.

“When I kept things to myself and was feeling a bit down on things, that’s where I struggled most. But when I actually picked up the phone and talked about it all, even when I was just listening, all of that helped.

“I think for anyone that is feeling a bit down from being away from home, you really have to try and reach out to your club and your core group, they’re there to help you.

“And your family will always be there for you, even just making a FaceTime call to interact with them as much as possible goes a long way…”

Whilst she’s currently back living in Ireland, Considine is hoping to eventually be back with the Crows that would see her return in Australia for the 2021 AFLW season.