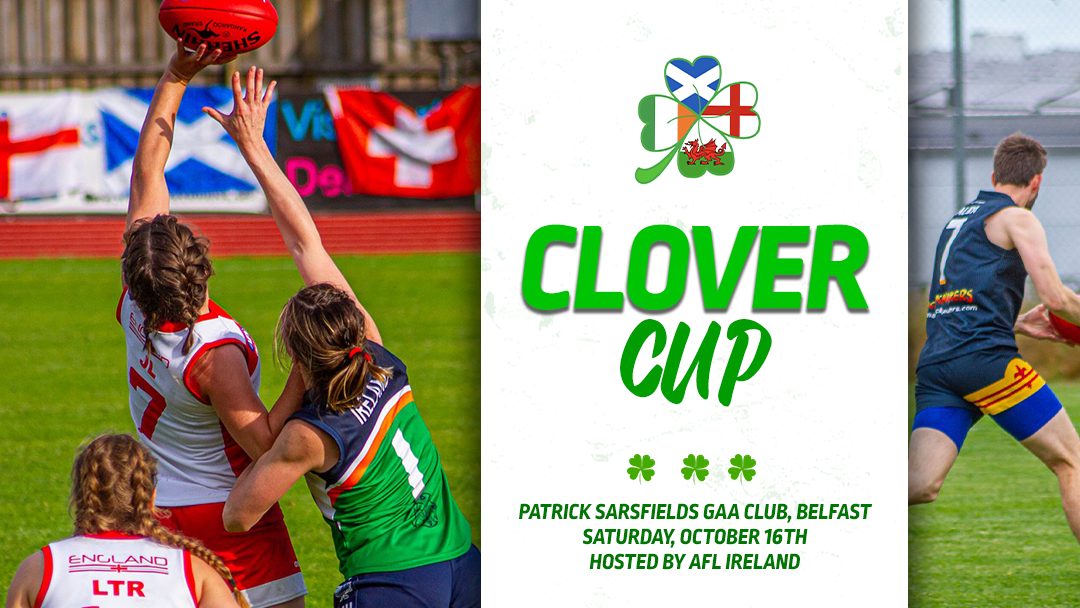 Some of AFL Europe’s top national teams are heading to Northern Ireland for a 10-a-side tournament on Saturday, October 16th.

The inaugural Clover Cup, hosted by AFL Ireland, welcomes the men’s and women’s national sides from Ireland and the United Kingdom to compete at Patrick Sarsfields GAA club in West Belfast.

A total of nine teams will be participating across two pitches in what will be the first time that these sides have lined up against one another since AFL Europe’s Euro Cup in Norrtälje, Sweden two years ago. It’ll be an exciting match-up between the Banshees and Vixens who last met in the grand final of the Euro Cup in 2019. A commanding second half saw the Irish girls steer clear as 30-point victors.

Wales finished 6th in the 2019 Euro Cup, while Scotland did not compete. The Scottish girls have been longing to get back into some international footy and will be ready to challenge Ireland and England after the completion of the inaugural AFL Scotland women’s competition (SARFL Women’s).

The Machas are a new team competing at the tournament and will be made up of players within the Ulster area. The Warriors are expected to be strong with a number of national team tryouts and trainings already held over the past few months.

The Clansmen, Wolfhounds and Dragons will be up for the challenge in what is going to be a very competitive tournament.

Unfortunately, there’ll be no Euro Cup men’s grand final rematch due to the absence of the England Dragonslayers who are unable to participate in the upcoming event.

The Wolfhounds, like the Machas, will be made up of players from the Ulster region. Both tournaments will begin at 10:30AM local time in what will be the first encounter of Australian Football for the venue in Belfast.

The round robin format for both competitions will see games played in 14-minute halves, with the day’s play wrapping up before 5:00PM.

The Clover Cup is still welcoming more umpires to officiate across the day. If you or someone you know would like to attend and help out with umpiring at the event, please contact any of the national team coaches or reach out to AFL Ireland via Facebook.

Fixtures and team lists are currently being confirmed and will also be announced on the AFL Europe website in the coming weeks.

Good luck to competing teams and congratulations to AFL Ireland and all involved for getting this tournament organised.

All attending teams fall within Northern Ireland’s Common Travel Area and will be able to safely attend the tournament.