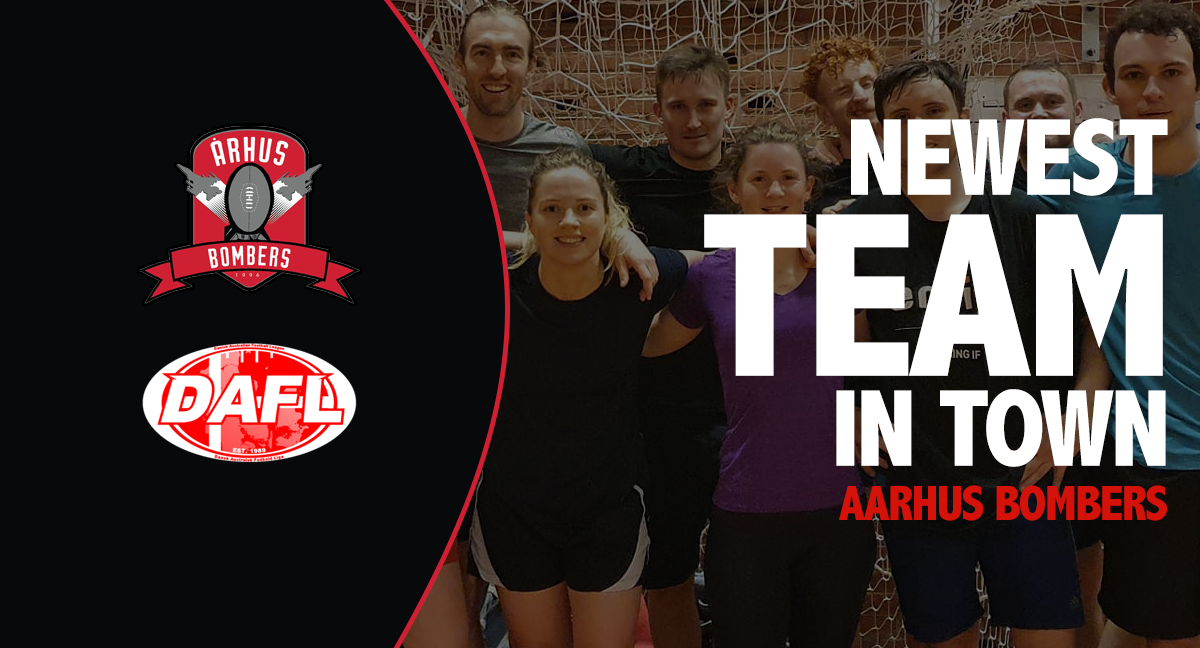 Reporter for AFL Europe, James Brosnan, spoke to Aarhus Bombers president, Kaspar Bruus, on the clubs revival as they get ready to make their mark in the Danish Australian Football League.

AUSTRALIAN footy in Denmark has been around for almost 30 years, making it one of the longest and largest Australian Football league’s in Europe.

Boasting a talented national side, Danish footy has been seen by the rest of Europe to have taken some big strides in recent years.

One of those strides is the rapid rise of the Aarhus Bombers, who were once a team in the 90’s, now ready to be revived.

“The club hasn’t been founded so much as it has been revived. It used to be a thing back in the 90’s and the early 2000’s… It was the Bombers back then which is why we chose the moniker,” said club president, Kaspar Bruus.

From handing out flyers at Aarhus University to other recruiting events and trainings, the Bombers’ past year and a half has been focussed on building a club that lives by  ‘foreningsliv’.

“Denmark has quite a tradition of amateur clubs, in footy, soccer, handball and what have you, there is this volunteer created spirit called foreningsliv, meaning community live which is a term the Danes identify with and find pride in.

“To create a proper community we need to root ourselves within the community.” 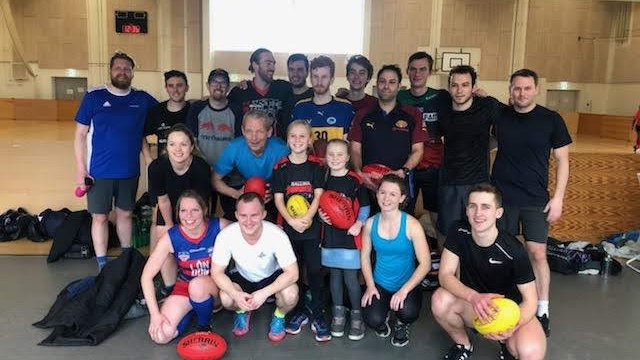 After making the move to Aarhus at the end of 2019, it didn’t take long for Bruus to get involved with the club which had already been training for a few weeks.

The former captain of the Odense Lions, who has been playing footy for six years now, was pivotal in the beginnings of the Bombers revival.

“It started back a year and a half ago from a man named Morten Merhøj.

“I had minor plans back then of maybe moving to Aarhus… we started taking the first steps back then because it felt like we should have a team in Aarhus.

“It’s too large a city to not have a team considering the Danish league is pretty well functioning.

“Given the good experiences we have had in Odense, growing the club from nothing, we figured it would be worth a shot. None of us could live without footy anyway, we thought we may as well create a club and it looks like there is a market for it.”

The three can be seen pictured above (Falkesgaard – second left, Bruus – middle, Walsh – right), elected into the board of the Aarhus Bombers earlier this year.

“We elected our board back in February… we have a five person group on the board, and quite a few people who are willing to help out.

“It’s quite a mix of Australians, Danes and people who have some experience in footy and running a club and others who have no experience at all.

“I think that’s the story of the club in general, that it will be a mix. 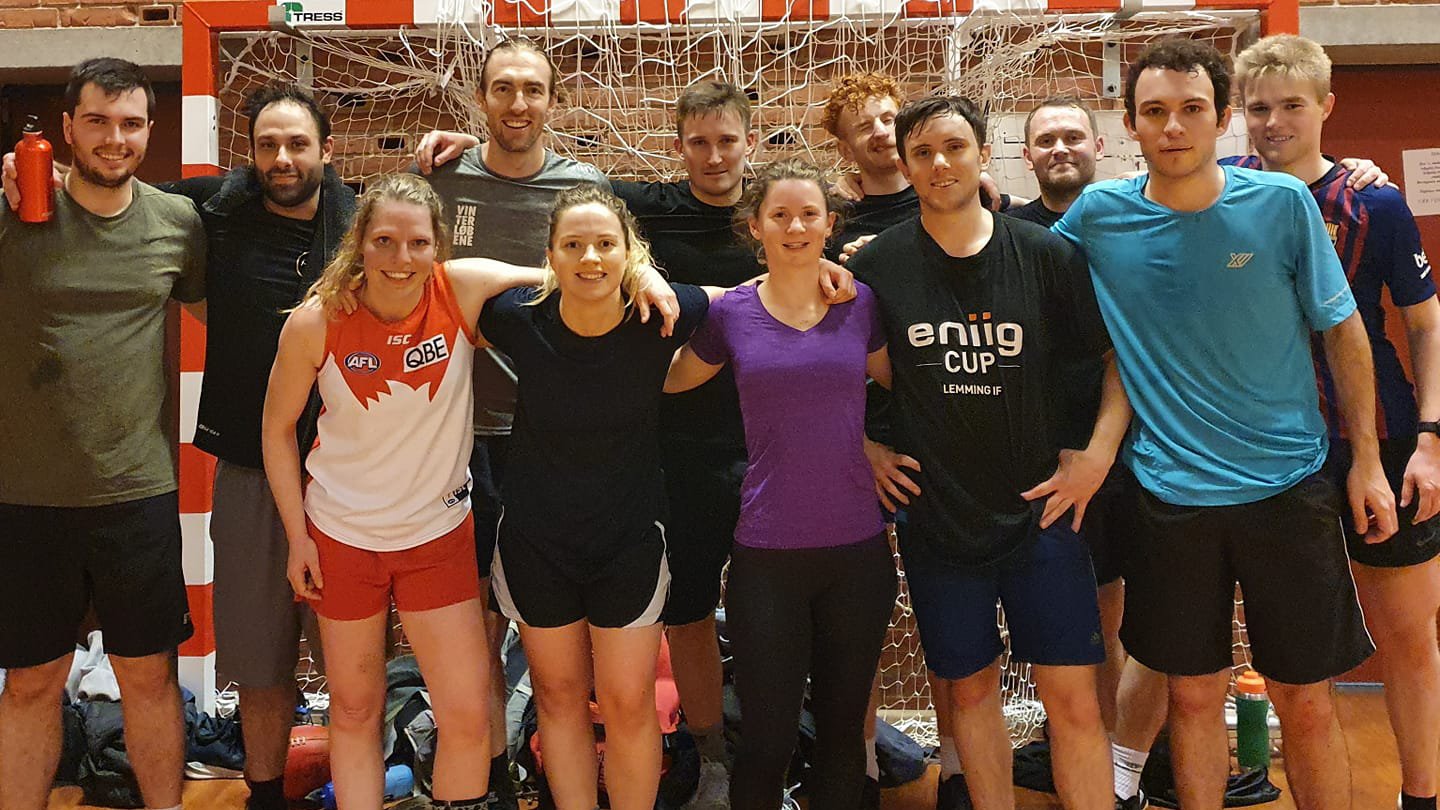 “Being the size it is, we have an expat community of sorts which we need to tap into it but we think it’s so important to also root ourselves in the Danish culture and get non-Australians because it just adds to the whole community feel.”

The team behind the Aarhus Bombers spent 2019 working hard to get a playing list together in preparation for the possible 2020 DAFL season.

“We started putting in the leg work from around a year back… in November through to February we trained indoors.

“Whilst that’s not the most attractive setting for footy, we had around 14 guys and girls coming down every week.

“Since we started training outside, we have had somewhere between ten and 15 people, it’s been a promising start at least.” 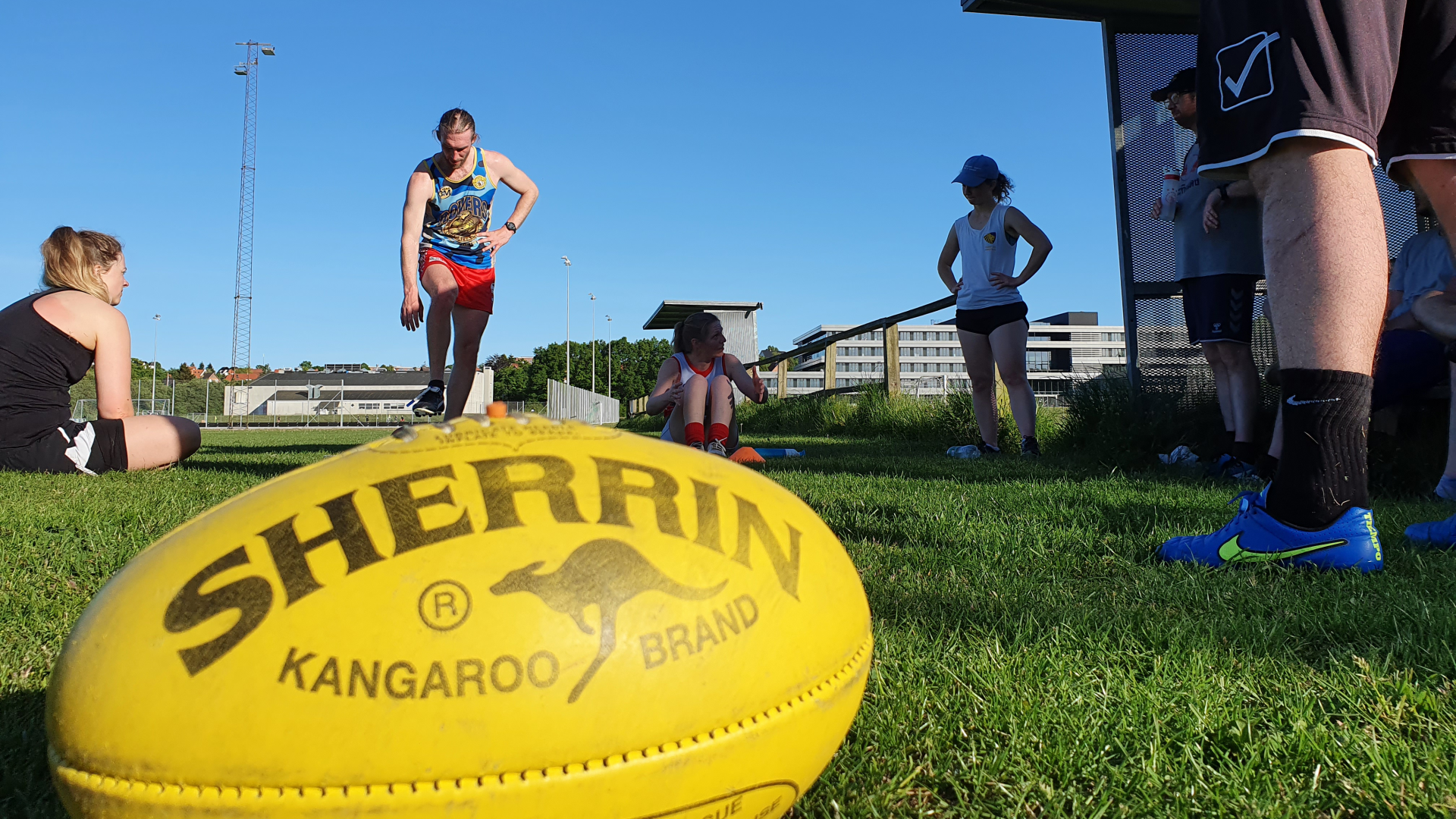 “This would have been our first season and it might still be… the plan in the Danish league is not set at the moment, so we’ll see.”

The rise of the Aarhus Bombers clearly excites Bruus, as he looks forward to what the future may hold for the club.

“I’m really impressed with the guys so far… we have quite a bit to build on, but we will get there for sure.

“People usually come with some sort of sporting background, it’s very rarely footy but we have had a few Gaelic football players down and quite a few converting from soccer which is a great start for learning footy.

“Our hope this year and maybe even the next few years is just to have a functioning team and start building the competitiveness.

Whilst he has his sights set on the future, Bruus has high hopes of building a women’s team for the Bombers too.

“We are very hopeful of getting a women’s team going.

“One of the key people to have joined us from Odense is is Maria Falkesgaard, who used to be Odense’s club president and has just been re-elected vice president of the DAFL.

“It’s a smaller market for women’s footy but I think it’s quite important we get a women’s team going because it adds to the diverse community we are aiming for.

“Also in recent years, we have seen the growth of women’s footy in Denmark… there is potential there for sure.”

In the meantime, Bruus and the team await the commencement of the 2020 DAFL season, and very much look forward to soon organising their own ‘Bombers’ playing kits.

To learn more about the Aarhus Bombers, or to find your Newest Team in Town, check out our Find Your Club page.

Race to the MCG – Week One Review