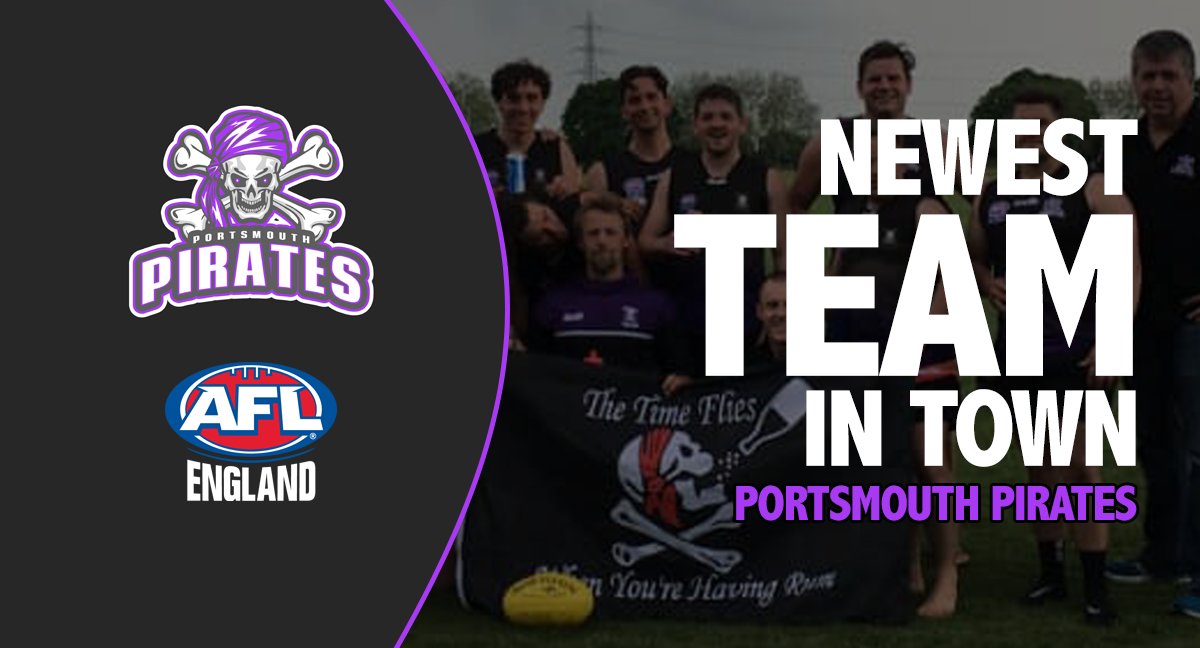 Reporter for AFL Europe, James Brosnan, spoke to president of the Portsmouth Pirates, John Titcombe, on the club’s development of growing into AFL London’s 18-a-side league and beyond.

After a five-year absence, the Portsmouth Pirates in 2018 re-established themselves into Europe’s Australian Football scene.

Located in the south-east of England, the Pirates have made some big strides thanks to a dedicated committee and a strong relationship with their local rugby community.

In their short time since returning, the club has formed juniors from under 7’s upwards, joined the AFL London Social League, experienced large success through several methods of recruitment and built great relationships with key sponsors.

Some may actually remember the Portsmouth Pirates, originally a team in AFL England that started approximately ten years ago.

“I was involved right from the beginning, back in 2009 was our first season,” said Titcombe.

“We played in the Southern League and played for about four seasons, and then the league started to struggle, in turn losing a few teams.”

Unfortunately for the Pirates, they had become one of those teams.

However, a couple years later a few of Titcombe’s current rugby teammates happened to stumble across the Pirates website.

“Some of the guys from my rugby club were looking around to see what they could still do through the summer.

“My name was still listed as the president of the Portsmouth Pirates, they must’ve found it at the bottom of the internet somewhere.

“They asked me ‘Do you know your president of an Aussie Rules club?’

“I said that I used to be… and just like that we were keen to get it back up together again.” 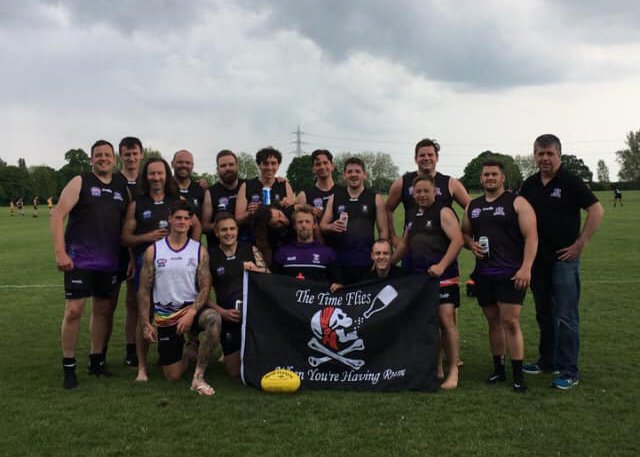 The Pirates quickly pulled a team together with majority of their players coming from the local rugby club, and would go on to make an impressive return into the Southern League in 2018.

“We played in AFL England’s Southern League, and had a really good season to be fair in our first year back.

“If we hadn’t of joined the Southern League (in 2018) there would’ve been only two teams that year. It was good timing really.”

That year, AFL England’s Southern League and the Welsh Australian Rules Football League decided to link up with an inter-connected league structure.

“It became a mixed league where we first played each other in our league and then played a crossover round with Wales to play some more games with different teams.”

In their first year back, the Pirates lost the flag by just one point.

The belief they developed from such an impressive return gave the club much hope of growing into the future, as they begun to make moves in that next 2018/19 off-season. 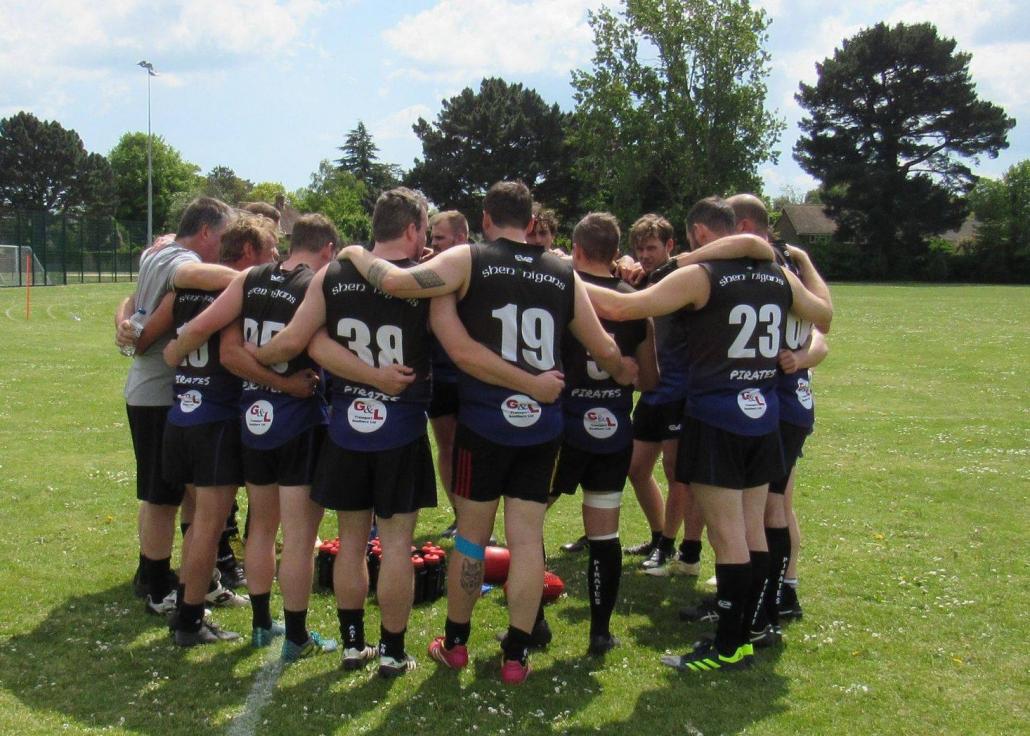 “We approached AFL London and told them that we wanted to play 18-a-side and grow the club, that we’ve got plans for a juniors section (which has started to happen now) and that we want to build something down here in the south.”

Becoming successful in joining the 2019 AFL London third division, the Pirates made a jump from 9-a-side matches to 18-a-side.

Along with that came opposition clubs with much larger teams that were fielded with much more experience, on much bigger ovals.

“It was a bit of an eye opener, a few lessons got learnt in that first year,” said Titcombe.

“We’re predominately British players, last season we had only four Australians playing in our squad, the rest of them were British players that have come from rugby and football backgrounds. 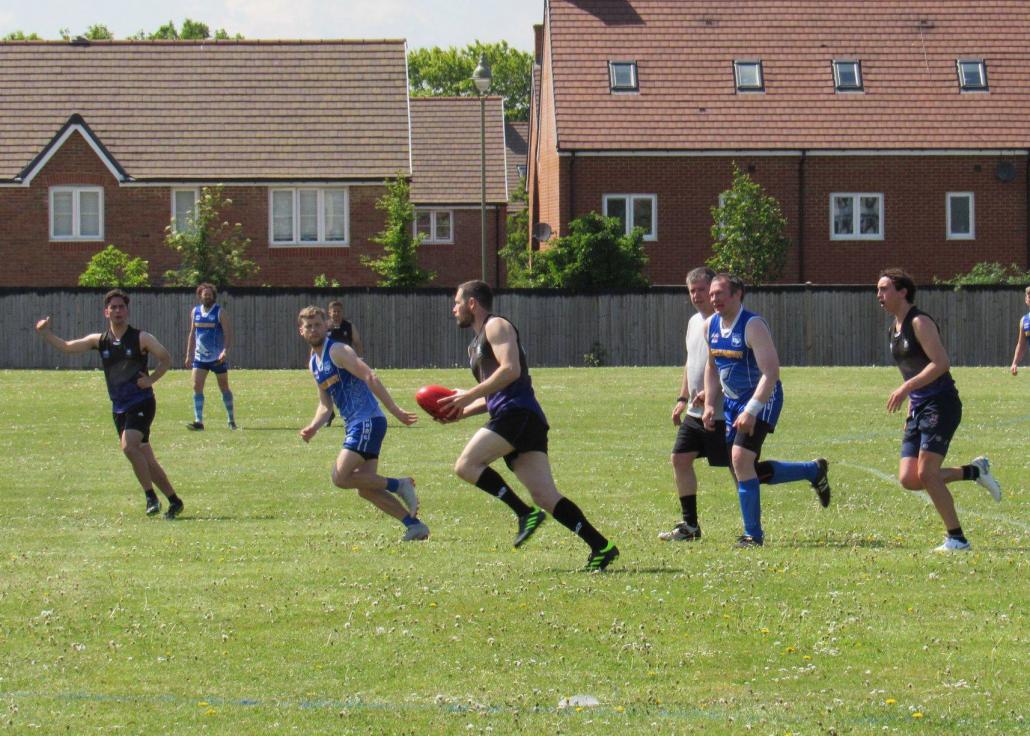 “Most of our players were making their debut that season, so we gave away a lot of experience to some of the teams we came up against.

“We got two wins and finished sixth on the ladder out of eight, so we thought it was a pretty successful first season.”

Had this year gone as planned, the Pirates were ready to make further developments to build the club.

“Most of our goals (this year) were off-field, so what we’re trying to do is in terms of the community and with the sport, the club and our brand.

“Perhaps our biggest goal for us this year was recruitment, we had a couple of times last year where we didn’t have anywhere near a bench.

“At the start of this year we were looking at about 35+ members, so recruitment had gone well.

“We’re also looking to branch out a little bit more and work with pods like universities, colleges and schools to spread the word of the sport and our club.” 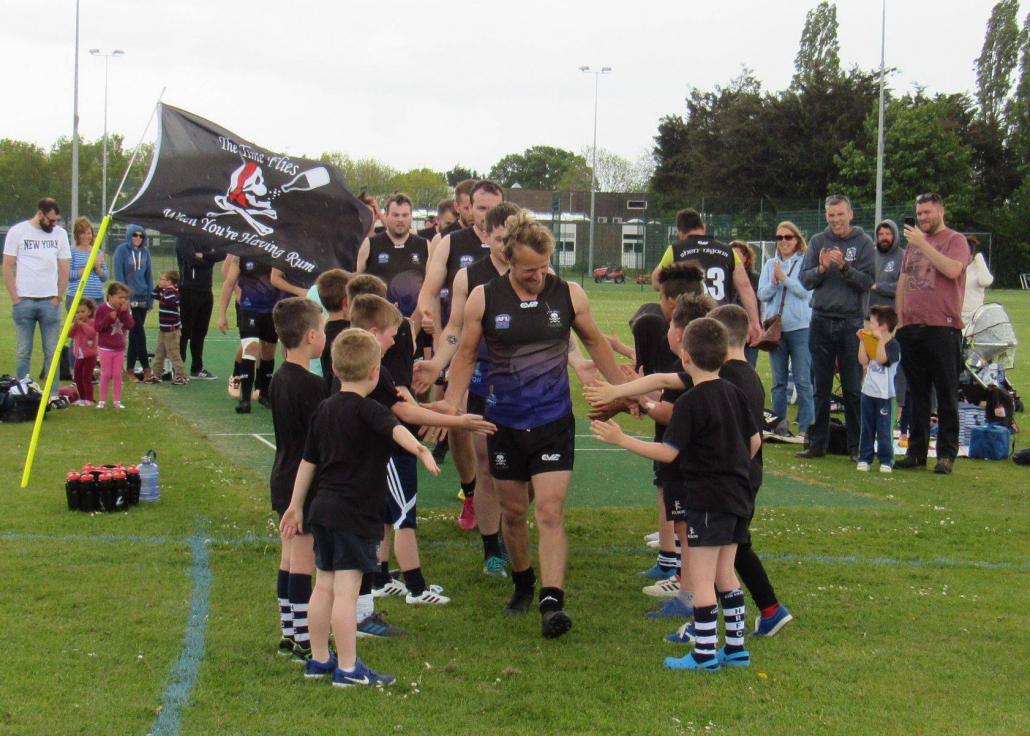 Whilst the Pirates look to target some younger players through just that, they already have in place a healthy junior system.

“We’ve got a good strong link with one of the junior sections at a rugby club that a couple of our guys coach at.

“We had about 25 juniors signed on to sessions, they did about six sessions last summer.

“The future is there… this year we had plans to incorporate two more age groups which would’ve taken us to about 50 children across three age ranges.

“The junior side is looking like it’s definitely going to take off in the next couple of years.”

Unfortunately, the Pirates had to cancel a couple of their recruiting events that they were hoping to run earlier this year.

“We still had a couple of events we were looking to do, again within the rugby community which is a lot of what our stuff is down here, we don’t have that ‘Aussie base’.

“We had a charity game between two of the rugby sides and we were going to go to one of their events and do a bit of a showcase of Australian Football for some extra recruitment.”

For now, 2020 has become a year off for the Portsmouth Pirates who look forward to resuming things in 2021.

“Where there was no season going ahead with AFL London, we’ve taken the decision to not train until 2021.

“We’re staying together as a squad… about 3/4 of our team all play for the same rugby club as well, so we’ve been keeping our fitness up and preparing for the upcoming rugby season.

“We’ve been staying together socially that way, just without that footy element if you like.

Good fun out on the field with @stjudesgaa2013 doing a mixed training session and cross code game at the end. Lots of similar skills to get ready for the upcoming season & we look forward with partnering up moving forward! #aussierules #australianfootball #afl #AFL #gaelicfootball #portsmouthpirates #Wesailtogether #upthepirates #portsmouth #hampshire #GAA #afllondon #aflengland #crosscode

“We’ve got all our contacts still and recruited really well, and we were looking good numbers-wise, so it’s good to know everyone is still keen to stay involved next season when we go again.”

Titcombe was also extremely appreciative of the support that has been received from Portsmouth’s key sponsors, helping them stay afloat through this tough year.

“We’ve had four partners that have really helped us and we’re looking to continue to work with them as we build up.

“Wheelwrights Arms, Imperial Cars, Big Dogg Australia, AIT Services… a big thank you goes to them for the help they’ve given us.”