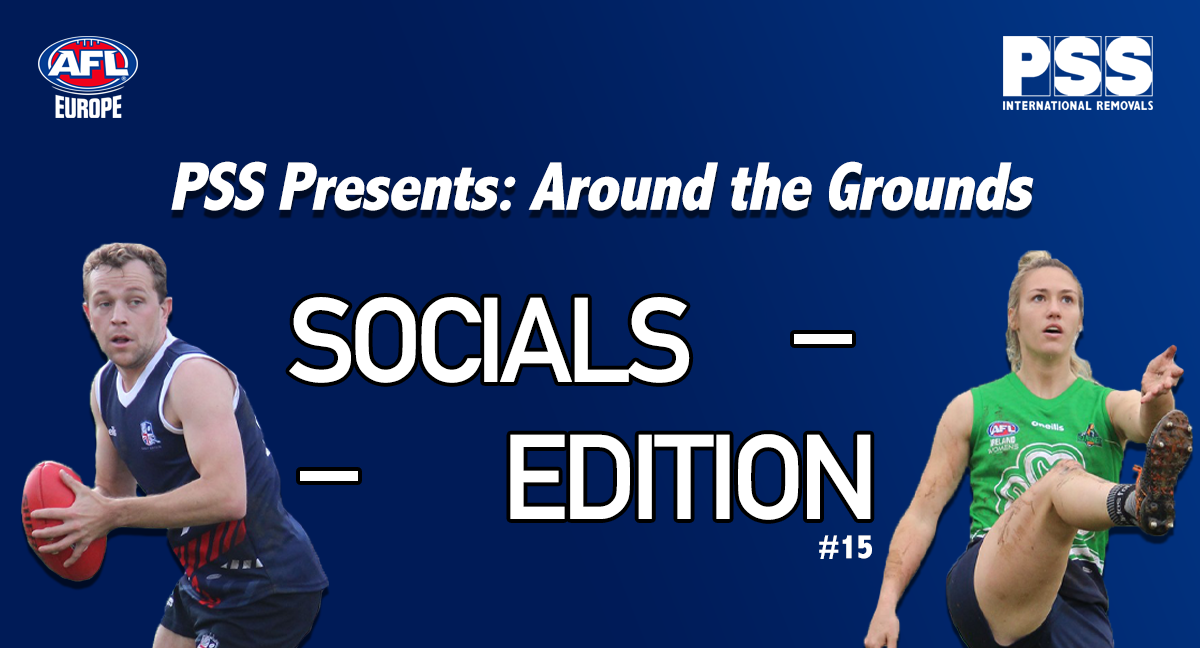 Last week, the AFL Europe social channels were filled with footy content as we saw Switzerland and Germany able to host their own match days, while players around the United Kingdom have been welcomed back to training.

In light of revised government guidelines, the Nottingham Scorpions were quick to get back out onto the park last week!

The Scorpions were one of many excited teams to resume training and were out in full force on the weekend, holding their first training since lockdown.

If your club is now allowed to resume training, we ask that you please do so safely.

A post shared by Nottingham Scorpions (@nottinghamscorpionsafl) on Jul 11, 2020 at 12:26pm PDT

Over to Northern Ireland and it’s the Belfast Redbacks who too are back into the swing of things.

The Redbacks held training on Thursday night, and we must say all players look very glad to be back!

The team have asked that if you are interested in attending one of their trainings that you please let them know beforehand via their Instagram page (below).

🔥🔥🔥 IT'S GREAT TO BE BACK🔥🔥🔥 Unreal session tonight! Thanks to Sean for the drills and to all the lads who came along! Redbacks abú Ps the Silver Fox in the bottom right is now available for all your wedding photography needs 👍🏻👀

Last weekend in Germany saw the inaugural Cologne League kick off, as three mixed-gender teams competed against each other in a 9-a-side tournament.

It seemed to be a thrilling day of football, with two games decided by less than a goal.

The day also marked what would have been “Janine Round” in the regular AFL Germany season. Along with many other clubs around Germany, the teams in the tournament wore Janine’s favourite colour (pink).

They were also very fortunate to have Janine’s mum at the ground, cheering on from the sidelines and later presenting her new initiative: Don’t Drink and Drive – Go Pink For Life.

The tournament raised more than €500.

On Saturday, we had the first gameday of the inaugural Cologne League – and what a blast it was!! Three mixed-gender teams, the Deutz Dingos, Sülz Sharks, and Ehrenfeld Platypi faced each other off in a 10-minutes-a-quarter, 9-a-side tournament. After this long Corona break, you could feel how much everyone was enjoying going for the footy, the contests, and the tackles resulting in three spactacular and tense games, with the Sharks coming out on top. Final Scores: Dingoes defeat Platypi (31 – 28) Sharks defeat Dingoes (51 – 27) Sharks defeat Platypi (35 – 30) Excited for the coming gamedays of the Cologne League and very happy that we are able to carefully and responsibly start playing again!! The day also marked what would have been the "Janine Round" in a regular AFLG season. The day was established to remember Janine, one of our club's and the German League's most active, successful, and passionate female players who tragically lost her life to a drunk driver. Along with many other teams around Germany, we sported Janine's favorite color pink and were very fortunate to have her mum at the ground to cheer us on and to present her new Initiative Don't drink and Drive – Go Pink for life. Over the day, we raised more than 500€ for the initiative and are looking forward to support it in the future as it is such an important cause – accidents as a result of drunk diving make up 10% of all traffic accidents and result in more than 16,000 people injured and 260 lives lost annually in Germany. Visit the initiative's website and instagram for more information and spread the word. #footyfamily #footy #aflg #colognegermany #sport #gopinkforlife #pink

A post shared by Rheinland Lions Aussie Rules (@rheinlandlionsaflg) on Jul 8, 2020 at 11:33am PDT

Switzerland have seen their first competitive match take to the field in 2020, with the Basel Dragons hosting the Winterthur Lions in a practice match last Saturday.

A five-goal first quarter for the Dragons saw them hit the lead early, holding on to outlast the Lions by just three points.

Basel are looking for more players to get involved so feel free to message them through Facebook and get along to one of their training sessions (every Wednesday from 6:15PM at the field in Rothausstrasse in Muttenz).

Last weekend saw Wandsworth Demons near the end of their big month of fundraising for Fight MND.

The ‘Big Freeze on the C’ campaign begun on the 8th of June in support of Fight MND and finding a cure for Motor Neurone Disease.⁣ ⁣⁣

The campaign has seen Demons players participate in a 24-hour walk around Clapham Common, sell merchandise, take part in multiple ice bucket challenges, host a raffle and much more!

The events have raised over £5000 in what has been an enormous effort by all involved.

**Sound on** 21km walked in silence by these girls today for @fightmnd 👏🏼 And rewarded with a refreshing Ice Bucket Challenge 🥶 at the finish line! We are on the final stretch of our Big Freeze on the C fundraising campaign to Freeze MND. Still time to grab some merch and raffle tickets at the link in our bio👆🏼 Entries close 11:59pm Sunday night, and the raffle will be drawn on Monday 13th July Keep up the great work #DEE5 ❄️ #fightmnd #bigfreezeatthec #freezemnd #FILTFC

With several games and trainings over the last two months, Australian Football in Croatia continues to progress during these tough times.

The Zagreb Panthers are making the most of the good weather in Croatia and have been very much honing their skills.

The Manchester Mosquitoes have begun preparing for what has been quoted by the Mosquitoes Facebook as “match of the century”.

Over the next few weeks, the Mosquitoes will be sharing player profiles and hosting a live draft night, talking to the respective captain’s about their teams and following the preparation of individual players as they get ready for the match.

See below for the first release of their player profiles. It’s not too late if you want to get involved, simply send them a message via Facebook!

Race to the MCG – Week Four Review
Scroll to top