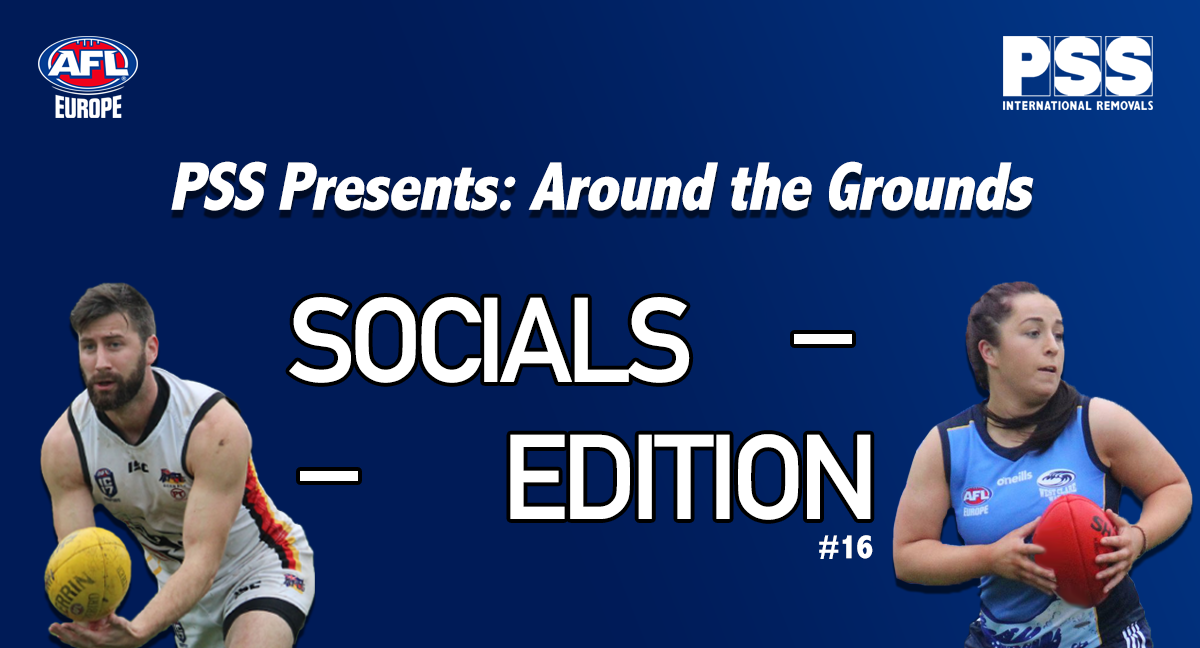 It’s been exciting to see so many teams around Europe safely return to training and now even commence competitive matches and leagues!

AFL Finland were one of those fortunate enough to field games last week, hosting their own “Hammerglass Game Day”.

Over 30 players attended the day to compete in a number of friendly matches made up of mixed teams.

It’s great to see all the hard work being done in Finland to allow Australian Football to continue to grow across the country! We’d like to applaud all involved in what looked like a very fun and successful day.

It was awesome to see three women and two juniors getting involved in the games too!

We had a blast on our mixed teams game day with the Red and White/blue teams. We mixed rosters a couple of times and the games were very even. We at #FAFL want to thank all who particpated. Awesome numbers (32! players). A special thanks to umpires Alban, Paul, Steve and Kimmo. It was an action paced day of #aussierules fun. More pictures to follow… @afleurope @helsinkiharps @waasawombats @helsinki.heatseekers @turkudockers

Community football has returned in New South Wales, Australia and it couldn’t have happened in any other way.

A local match in Merimbula was interrupted by two unexpected guests, who bounced onto the field and weaved through the opposition.

One of the most Australian videos you’ll ever see!

‘Put him in the ruck!’ 🦘 Ready to bounce into the first weekend of footy across NSW this weekend 💙 #myfootymoment 📸 @tathrabeach_ptstudio

The Hamburg Dockers are looking forward to welcoming the Hamburg League in 2020.

Three teams in the Pirates, Swans and Wombats will compete in a six round season, wrapping up around mid-September.

Captains for the three teams have already been announced, as they prepare to draft their teams on the 22nd of July.

Excited about the return of the Hamburg League! Swipe right for our captains for 2020 ➡️🖤💙❤️ #zonesedition

The North London Lions are back!

The Lions have joined a number of teams in the United Kingdom to be able to return to training over the past few weeks.

Check out this throwback to one of their training sessions at Regents Park in 2017/2018.

While times are pretty tough at the moment, let's be thankful that we can go to FOOTY TRAINING in some nice weather ☀️ (sunshine & 23 is the prediction)! Unlike Regents Park back in 2017/18 🥶 🏉 Training at 6pm, bring your own drink bottle 🍼, hand sanitiser 🧴, and positive attitude 😆! DM us if you want to be added to the WhatsApp group for Regents Park or Victoria Park.

Further north in the UK, it’s the Edinburgh Bloods who have also returned to training.

The Bloods spread their training across two rugby pitches with 20 players split into four groups.

“We have men’s and women’s teams of all skills, nationality’s, ages and level of banter. So if you’re keen to give it a crack, we want you.”

How good is footy!? 🙌🏼 Great to have our first socially distanced run about at the park to kick away the rust. We had 20 players, four groups, two rugby pitches and a whole lot of hand sanitizer. We have men’s and women’s teams of all skills, nationality’s, ages and level of banter. So if you’re keen to give it a crack, we want you. Training is ⏰ Saturday at 9.30am 📍 Inverleith Park ☎️ Message the page if interested so we can add you in to a group #afl #aflw #alfscotland #afleurope #edinburgh #edinburghbloods #footy #footysback #kick #kickkickkick #runrunrun #joinus

Mark “Grow’Connor” has had a great start to the 2020 AFL season, averaging just over 13 touches across six games.

The Cats have won their past three matches and will look to continue their hot form against Fremantle on the 27th of July.

Mark Grow'Connor and the Cats hit the gym 🏋🏻‍♂️ #GeelongStrong

As we head back over to Germany, another city is getting ready to host some competitive football.

The Dresden Wolves are looking forward to holding their first footy tournament in 2020.

The Wolves will welcome the Strasbourg Kangaroos, Prague Dragons and Leipzig Quokkas on the 1st of August for a big day of footy action!

The Basel Dragons from AFL Switzerland have made news in Australia.

The Dragons featured in an article that was published into the Herald Sun newspaper.

‘Swiss get an AFL lesson’ highlighted the practice match between Basel and Winterthur, which included former AFL player and Brisbane AFLW coach (since 2017), Craig Starcevich.

From the Herald Sun in Melbourne, Victoria,…

The 2020 AFL Ireland season is officially underway with the South Dublin Swans and Galway Magpies kicking things off last weekend.

The season is scheduled to last eight rounds, with limited games played each weekend and finals beginning in October.

The Swans opened up the season with a big win over the Magpies, with the results shown on their Instagram below. Make sure to scroll through to see the team sing the club song!

Swans got off to a great start in this years rearranged 2020 Premiership defeating the @galwaymagpies on a scoreline of Swans 20 20 140 Magpies 0 4 4 A minute silence was held before the game in honour of new captain Seamus Owens' girlfriends mother and former player Bobby Byrne's brother who both sadly passed in recent weeks and months. Ar dheis Dé go raibh a n-anamacha. Good numbers, experience and pressure around the footy gave us victory on the day! Work on the training ground coupled with a determined group of players all over the ground proved to be the determining factor on the day! Thanks to the Magpies for travelling in good numbers even with the current covid restrictions! They played hard right til the end and credit to them for a fair display! #footysback #roundone #ireland #dublin #galway #afl #footy #staysafe

Race to the MCG – Week Five Review
Scroll to top