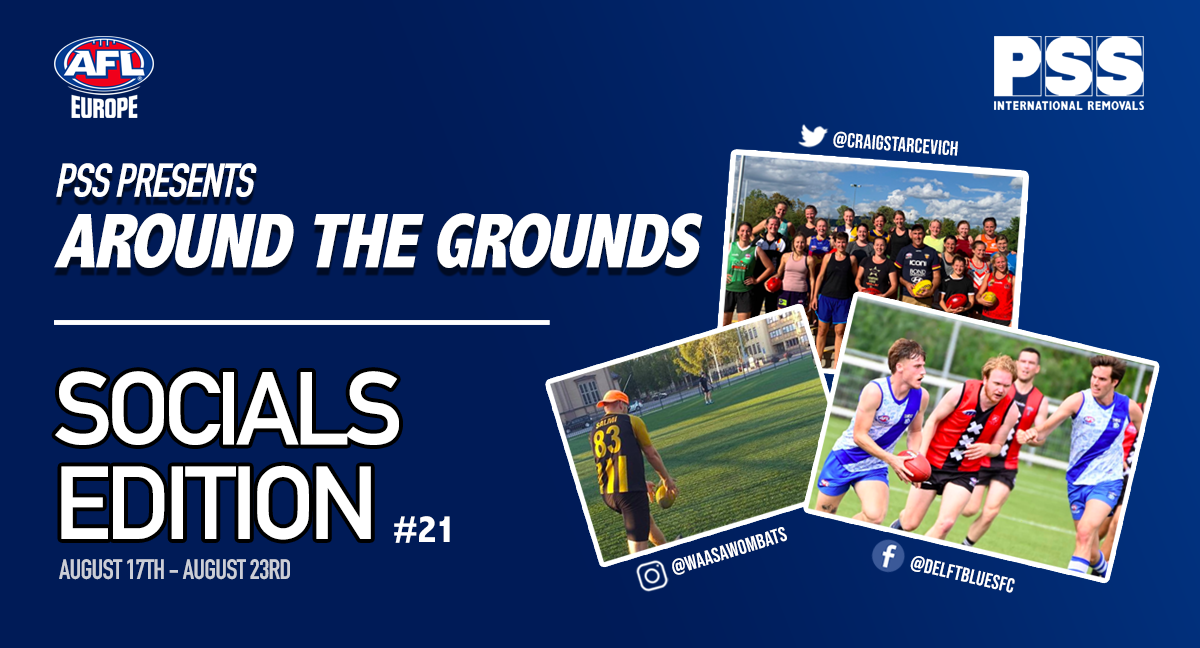 Eight different countries feature in this week’s edition of Around the Grounds as we take a look on social media to see what teams around Europe have been getting up to.

The Berlin Crocs in Germany held a ‘draft day’ in preparation for the newly formed Berlin League.

What a successful draft day, the biggest in croc’s history. So we proudly present you the draftees of 2020 that were picked for our 4 teams: North Berlin Crows, South Berlin Giants, West Berlin Eagles and East Berlin Mariners. #aflgermany #footy #afleurope

The Delft Blues have become victorious for the first time in 2020!

The Blues travelled to Waterland for round two of the AFL Netherlands Championship where they were successful in their clash against the home team.

Round three is scheduled for this weekend and will see the teams travel to Amsterdam.

First victory for the Delft Blues in 2020! Last weekend the Waterland Eagles hosted Round 2 of the AFL Netherlands…

The Waasa Wombats are currently loving autumn in Finland.

The Wombats were out and about, enjoying the sunshine at training which has produced some great snaps for their Instagram!

The autumn in #Finland is extraordinary…22 degrees celsius! Normally we would have around 15. This is of course nice as @Waasawombats could do their weekly training in sunny conditions. The #Aussierules session was fun and sweaty, a lot of kicks were done….and we mean a lot. We higly recommend you come and give the sport a try. The #mateship and #cameraderie in this sport, within and between teams is unbeliavable. All clubs are actively looking for more people, come and have a stress free session with any of our clubs (info in pictures)Club contacts via FB…no skill required. @helsinkiheatseekers https://m.facebook.com/helsinkiheatseekers @Waasawombats https://m.facebook.com/WaasaWombats/ @turkudockers https://m.facebook.com/TurkuDockers/ #FAFL #UusiHarrastus #Sports #Vaasa #Helsinki #Turku #Fun #hobby #harrastus #Australialainenjalkapallo #aussifudu #Australianrulesfootball #Afleurope #expatinfinland @aflinternational @afleurope

Paris Cockerelles took to Facebook to announce their club captains for 2020 & 2021.

Congratulations to Pauline, Pierre and Clément for your selections!

The Cockerelles continued this announcement with their 2020 & 2021 ‘office members’. Head to their Facebook below for more.

Get to know ‘Sooz’ from the Bristol Dockers.

The Dockers have taken to Instagram to feature a number of their players through ‘Player Profiles’.

Give Bristol a follow and get to know the whole team!

Starcevich helped out at one of their training sessions in Heidelberg, sharing plenty of his footy knowledge with the girls!

“The passion for @aflwomens in all corners of the world is amazing.”

Fantastic day spent with the @AFL_Europe German Eagles women’s team in Heidelberg. Women’s footy, & footy generally, in great shape. The passion for @aflwomens in all corners of the world is amazing. pic.twitter.com/Z3Y06yn53j

The AFL Switzerland podcast has returned!

Chrispy and Chief are back talking all things AFL Switzerland after the commencement of round one in the Swiss league.

In their first episode back, the boys are joined by guests Dale Halliday from the Geneva Jets and Stefan Burgener from the Winterthur Lions.

The AFL Switzerland Podcast with Chrispy and Chief has returned for the 2020 season.New Episode – Round 1 2020The…

Interested to know which Irish players have signed on for the AFL Women’s 2021 season?

Check out AFL Womens on Instagram who have shared a number of photos of the girls in action.

The latest Irish to join the league was Lauren Magee, joining the Demons last week.

Can’t wait to get craic-ing with the 1️⃣6️⃣ Irish players coming back for more in 2021!

The Zagreb Panthers have been keeping active!

Check out the Panthers pushing through a workout session last week.

Race to the MCG – Week Ten Review
Scroll to top