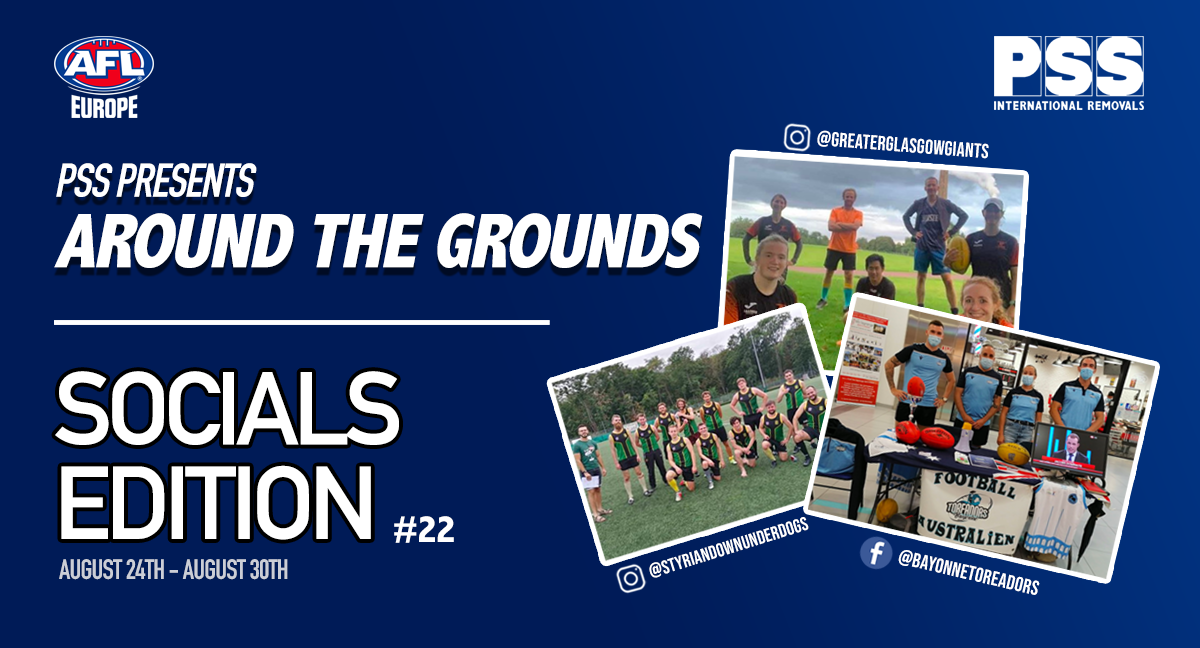 The Bayonne Toreadors have been doing their bit to promote Australian Football!

Last weekend a few of the Toreadors members set up shop at the Ametzondo Shopping Centre to attract new players to the sport.

They even got interviewed! Check it out here.

A new men’s and women’s team is getting ready to join AFL Germany.

The Heidelberg Knights will become the tenth team to join the competition and are preparing for their first ‘taster session’.

The German Women’s national team have given the training grounds in Heidelberg a tick of approval thanks to a training camp with Craig Starcevich.

A new sport is taking over Heidelberg – Australian Rules Football 🏈 We are starting a new team in Heidelberg to join the AFL Germany competition. 🇦🇺 🇩🇪 Interested in being part of a brand new MEN‘s and WOMEN‘s Team? No experience needed and all ages welcome. 🙌🏻 You have no idea what Australian Football is? Follow us now to find out more about this sport. 💪🏻☺️ Our first taster session will be announced soon. Stay tuned 😍

The Styrian DownUnderDogs travelled north on the weekend to face off against the Vienna Galahs.

The DownUnderDogs led for most of the afternoon but in the end could not hold off the opposition, losing to the Galahs 47-55.

Check out some snaps from the match below.

A post shared by Styrian DownUnderDogs (@styriandownunderdogs) on Aug 30, 2020 at 4:44am PDT

The Greater Glasgow Giants have returned to Glasgow Green!

The Giants are one of the latest teams to announce a return to training which will combine both their men’s and women’s teams on Wednesday nights.

Let them know if you’re interested in attending so that they can continue to ensure safe training guidelines.

The two clubs came together and merged sporting codes to create an International Rules tournament.

Check out some photos from the tournament on Instagram thanks to the Heatseekers.

Some pictures from #helsinkisummerseries International Rules tournament that was held yesterday. You can find more photos on the @helsinkiharps Facebook page. Big thanks to all of the organizers and participants for a great day of International Rules! #helsinki #heatseekers #harps #afl #aflfinland #afleurope #gaelicfootball #footy #internationalrules

Photos from Aarhus Bombers’ match against Odense in the Danish AFL have been shared on Facebook.

The Bombers unfortunately couldn’t get the win, but will be looking to turn things around against the Cats this Saturday.

Aarhus are the newest team in Denmark after forming in 2019.

The photos from Saturday's game in odense keep rolling in.Next up for the bombers is Farum Cats at home Saturday 5…

Get to know the players at the Nottingham Scorpions thanks to their new ‘meet the players’ series!

The Scorpions men’s and women’s teams train on Saturday morning’s and are always welcoming new players.

Make sure to get in touch with them below if you’d like to get involved.

Next in our series of meet the players is a legend of the women's game. Our men's and women's teams train on a Saturday morning and are always welcoming new players who would like to try out the sport. It's great fun and great for fitness. All people on all abilities are welcome as its a brand new sport for everyone we offer coaching in a supportive environment so get in touch if you want to try out Australian Football! #afl #aflw #nottingham #notts #thisgirlcan #trysomethingnew #nottinghamshire

A post shared by Nottingham Scorpions (@nottinghamscorpionsafl) on Aug 28, 2020 at 2:09am PDT

Festival of Football
Scroll to top