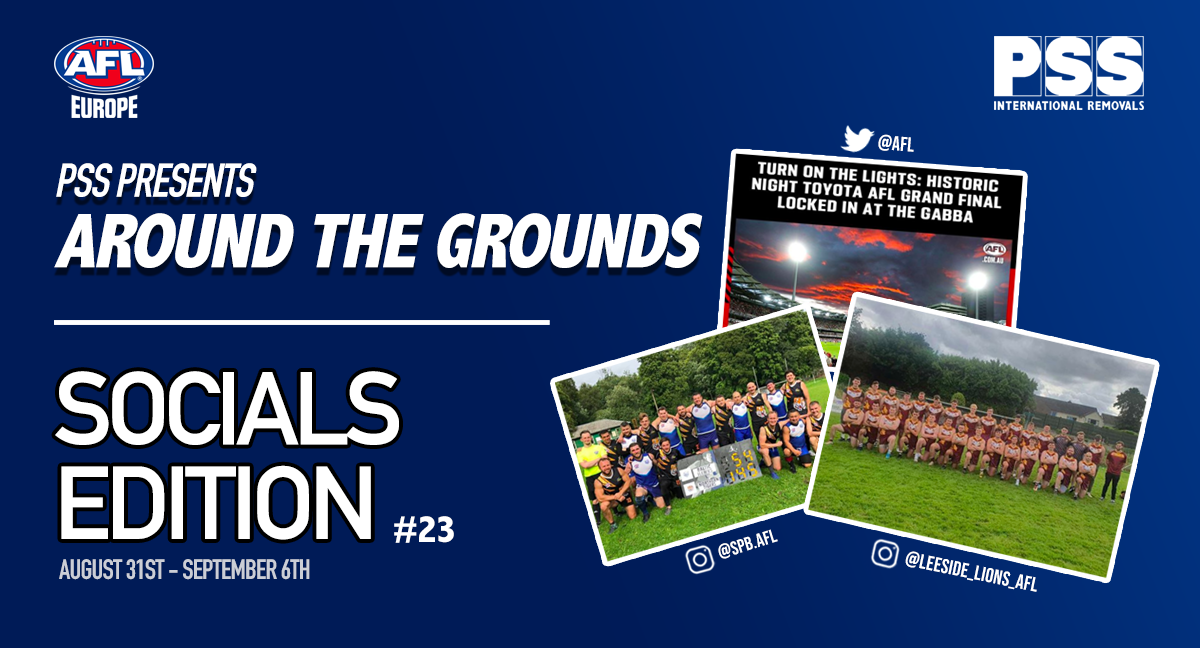 Another weekly recap of footy news as we enter September and near some footy grand finals being played around Europe.

The Waterland Eagles are through to the AFL Netherlands grand final!

They will now prepare for a trip to Purmerend to face the Amsterdam Devils in the grand final on September 19th.

We’re off to the GRAND FINAL! 🦅

A post shared by Australian Football Purmerend (@waterlandeagles) on Sep 5, 2020 at 10:58pm PDT

Good news for footy fans in Europe thanks to a huge announcement last week by the AFL.

For the first time ever, the AFL Grand Final will be played outside of Victoria… in Brisbane, Queensland!

But it doesn’t stop there, the game will start at night (exact time TBC) meaning that fans in Europe will no longer have to wake up before 6AM to watch the game!

“The COVID pandemic has meant we have had to take the game outside of Melbourne. For this year only before it returns home to the MCG in 2021.” https://t.co/POA12PLmYh

Last weekend saw St. Petersburg play out round 6 of the SPAFL 2020 season.

The season features two teams in the Baltic Hawks and Northern Tigers, and started on the 1st of August.

The Tigers have gone six games undefeated… do the Hawks have what it takes get one back in round 7?

AFL Finland are on the search for new talent!

A few of the Waasa Wombats players last week held a 90-minute ‘taster session’ at a local school.

“We went through the basics (rules, handball, kicks, tackles) and even had time for 3x 6-minute minigames of 6v6. It looked awesome.”

The heroic fundraising efforts by the Wandsworth Demons towards a cure for Motor Neurone Disease was recently highlighted by Fight MND on their socials.

The ‘Big Freeze at the ‘C’ is the only annual Big Freeze fundraiser held outside of Australia. This year, the Demons raised $15,000 through a number of different events and activities over the 5-week campaign.

Which AFL London club holds FightMND’s only international annual fundraising event known as Big Freeze at the ‘C? Find out who, and how they fundraised a record-breaking amount despite COVID-19 in 2020 via the 🔗 in our bio!

Inside the locker room with the Vienna Galahs as Kieran Kellet from Australia has taken over the reigns as coach after suffering an unfortunate ACL injury earlier this year.

His game plan seems to be working, with the Galahs being victorious against the DownUnderDogs just over a week ago!

Make sure to message the team via their Instagram below if you’re keen to play some footy in Austria.

Behind every winning game plan is a man, and our man is Coach Kieran Kellet from Melbourne 🇦🇺, coaching this season after an ACL injury earlier this year.

Three games in and the Leeside Lions are sitting on top of the AFL Ireland ladder.

Last weekend the Lions handed the Belfast Redbacks their first loss of the season, winning by over 70-points!

Leeside will be back at it again this weekend when they take on the Galway Magpies on Saturday.

Another win for the Lions 🦁 we managed to take advantage of the windy conditions. A huge thank you to @belfastredbacksarfc for making the journey down to us, you guys put up a great fight and we’re looking forward to coming up to Belfast for round 2! Final score Leeside Lions: 14-12-96 Belfast Redbacks: 3-5-23 #aflireland #afleurope #afl #aussierulesfootball @aflireland32 @afleurope

Keeping it Irish with some news out of Australia.

O’Connor has written a piece that featured on the AFL Players Association website about his teammate, Zach Tuohy, becoming just the second Irishman to reach 200 AFL games.

On Sunday, the Geelong Cats' Zach Tuohy will become the second Irishman to reach 200 AFL games after Jim…

Hanley played 169-games throughout his time in the AFL after making his debut as a 19-year-old in 2008 for the Brisbane Lions.

Watch Hanley announce his retirement to his teammates in the video here.

After 169 AFL games, former vice-captain @pearcehanley has called time on his career. As a valued part our footy club over the last four years, we wish him all the best in the future. Go raibh maith agat, Pearce ☘️