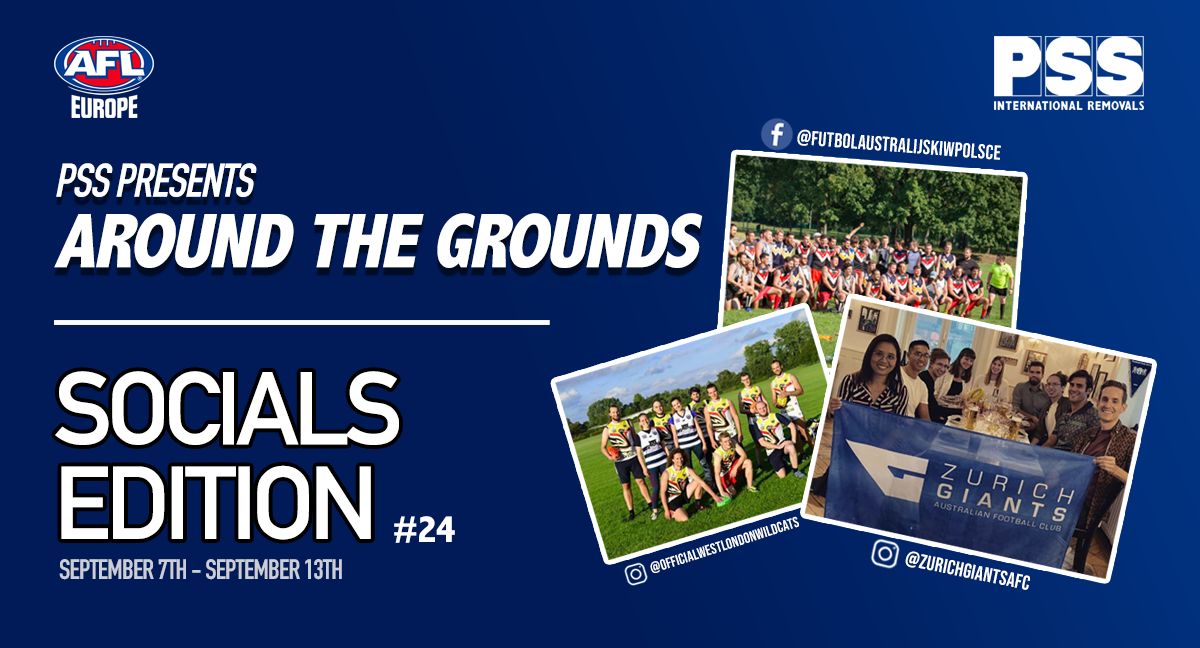 The four-team tournament in Warsaw featured two home sides in the Warsaw Boars and Warsaw Saints (first time competing under Boars & Saints) and two away sides in the Dresden Wolves (Germany) and Prague Dragons (Czech Republic).

Congratulations to the Wolves for winning the tournament, and to AFL Poland for hosting a fantastic day of Australian Football!

The Berlin Crocs have shared some snaps from the first two rounds of their Berlin League!

The season kicked off just over a week ago with four teams; Crows, Eagles, Giants & Mariners.

Check out some of the best photos from rounds 1 & 2 below.

The South Dublin Swans have bounced back to record a big win over Belfast!

Next, the second-placed Swans travel south to take on the undefeated Leeside Lions.

Today game was another hard fought game dictated by the strong wind. @belfastredbacksarfc took the lead with a strong first quarter only for the swans to do the same in the second quarter. At the end of the 3rd quarter the game was tied 58-58 with the Swans squad depth and the wind advantage allowed us to pull away in the final quarter. Final score South Dublin Swans 13-12 = 90 Belfast Redbacks 9-5 = 59

Wildcats guernseys are spreading throughout Europe!

Stefan from the Kiel Koalas has received a handy package from the West London Wildcats to help out the new team in Germany.

Stefan played his first game of AFL with West London in 2019, and after returning home earlier this year, has now helped set up Kiel’s very first AFL team.

Last year, Stefan came down to the @westlondonwildcats not knowing a thing about AFL – he ended up playing a season for the Emus and returned to Germany in 2020 to set up the @kiel_koalas (Kiel's very first AFL club!). We're stoked to see them sporting our colours across the pond and can't wait to cheer them on in their first match! ⁠ ⁠ #feelgoofriday #westlondonwildcats #afleurope #aussierules #aflg

A post shared by West London Wildcats (@officialwestlondonwildcats) on Sep 10, 2020 at 11:01pm PDT

Zurich Giants have taken to Instagram to celebrate one year since joining AFL Switzerland.

Congratulations to the Giants for an incredible first year, we can’t wait to see where your second year will take you!

“Let me present you “the Giants” in numbers: over 52 turf training sessions… over 39 members which means 3 new members per month… over 10 different nationalities.”

Last Tuesday, we celebrated our anniversary. It has been one year since we officially are called the Giants and train as a team for our first season within Switzerland in 2020. It's worth sharing some numbers with you. Let me present you "the Giants" in numbers: …over 52 turf training sessions. …1/2 year of online fitness training sessions. …over 39 members which means 3 new members per month. …so far 1 win on and off the field. …over 10 different nationalities. …so far 13 potential Swiss National Players for AFL Switzerland. …at the moment 6 playing women. …over 10 social events like Raclette Plausch, BBQ's, come&try sessions, good bye dinners and birthday celebrations. Remembering that this is the success of lots of supporters and hard working people on and off the field, the Giants want to say thank you to everyone who made this possible. The future for us is looking bright, keep on working and well done team! #gogiants #zurichgiantsafc #aflswitzerland #AFLEurope #aussierules #socialsports

Competitive ‘footy’ for Stockholm’s first-ever women’s AFL club is back!

“Stockholm turned off the weather but we were finally able to kick off some competitive games again starting with international rules yesterday!”

Nothing like a bit of wet weather footy! Stockholm turned off the weather but we were finally able to kick off some competitive games again starting with international rules yesterday! Tusen tack till @stockholmgaels 🙌🏼🙌🏼 And thanks to @rooandelk for providing us our own area to relax after the game! Next training Hagaparken Södra kl 18:30 • • • • #afleuropewomens #womensfooty #aflsweden #afl #aflw #swedishravens #internationalrulesfootball

Another Irishman has called time on his AFL career.

Essendon speedster Conor McKenna has announced his retirement from the league and his intentions to return home after 79 games with the club.

Last year McKenna finished fourth in Essendon’s Best & Fairest count, when at his best was one of the top attacking half-backs in the competition.

And to finish off this week’s recap, we go back to right where we started!

The Dresden Wolves celebrated their win at AFL Poland’s tournament in Warsaw with a new addition to the trophy cabinet (see below).

Well done to all Wolves players for a great victory.