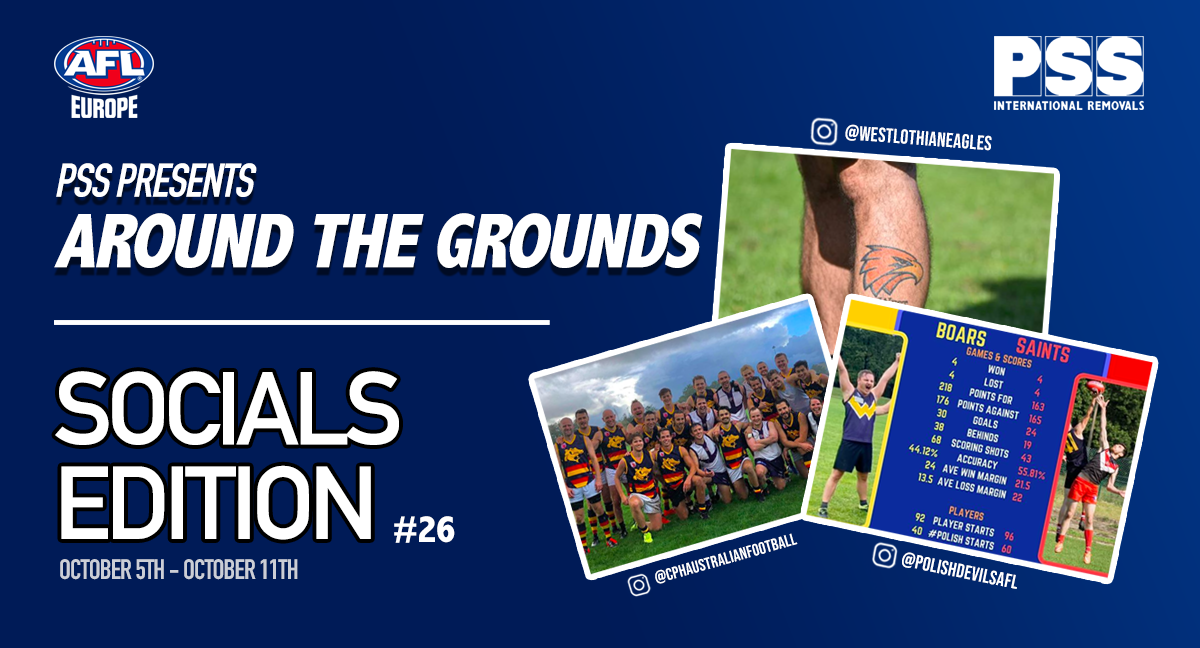 As we near the winter months, certain teams around Europe have been changing up training days, times and venues to adapt to the cooler conditions.

One of those teams is the Frankfurt Redbacks & Redcats, who have moved training onto artificial turf under some bright lights.

“Lights on and the stage is set for our new winter training ground!”

Lights on and the stage is set for our new winter training ground! Good spirit in spite of wind and weather! #training #redcats #redbacks #frankfurt #aflg #afl

A post shared by Frankfurt Football Club (@frankfurtfootballclub) on Oct 6, 2020 at 2:00pm PDT

The Copenhagen Barracudas have finished off the 2020 DAFL season in style.

Beating the Aarhus Bombers for their sixth win saw the Barracudas finish the season undefeated and on top of the ladder.

Heading into the finals as favourites, they will now prepare for their matchup against Odense this weekend.

Cudas took home another win to make it 6-0 for the season! Thanks to everyone who made it down to the pond to watch the game! Big thanks to #aarhusaustralskfodbold for a great match and to the cudas who helped them out during the game. Now for finals!! #finsup #afl #afleurope #aflinternational #aussierules #copenhagenbarracudas #cudascan

A post shared by Copenhagen Australian Football (@cphaustralianfootball) on Oct 11, 2020 at 12:22am PDT

Another team making it through to the post-season in the DAFL was the Farum Cats.

Over the weekend, the Cats defeated the Aalborg Kangaroos by 58-points.

The second-placed Cats will take on the Copenhagen Giants in the the DAFL’s second semi final.

Over to France, and footy for the year is only just beginning.

The season launched just last weekend and is set to last until April 2021, with teams scheduled to have at least a two-week break between games.

It’s been a long wait for the French teams so we’re excited to see some of the results that come through!

Check out this highlights video from the Bordeaux Bombers’ first game against Perpignan Tigers last weekend.

We’re excited to share and congratulate the 17th Irishwoman to sign for the 2021 AFL Women’s season, Brid Stack.

The announcement came early in the week with the NAB AFL Women’s draft occurring last Tuesday.

Stack has had quite an amazing Gaelic career and the accolades have most definitely followed! (Click below).

We’re looking forward to seeing you with the GWS Giants and wishing you all the best in Australia.

How’s this for dedication to your team!?

West Lothian Eagles have shared a snap of one of their own players with the club logo tattoo’d on his leg.

The Eagles are always keeping active on social media so make sure to give them a follow to check out more of their content.

@cookiemonster666 showing off his club tattoo the other week at our intra club game. Who else has a club tattoo?? #tattoo #leg #intraclub #showoff #eagles #eaglesfamily #tattoos #clublogo #clubtattoo #showusyours #pins #legdayeveryday #afl

The Polish Devils have taken to Instagram comparing the two Warsaw teams and their first eight games.

It’s quite equal thus far with both teams registering four wins each!

The rivalry between the Boars & Saints is definitely going to be one to watch in 2021 and over the next few years.

AFL jest jedną z najbardziej bogatych w statystyki gier na świecie, a z naszymi 2 nowymi zespołami w Warszawie mamy bardzo interesującą sytuację. Poniżej możesz zobaczyć statystyki i fakty z 8 meczów, które rozegrali Warsaw Boars i Warsaw Saints w ostatnim miesiącu. Grafika jest w języku angielskim, ponieważ niektórych słów nie można przetłumaczyć 🤷‍♂️Komu kibicujesz?⠀ ⠀ Our game is one of the most statistic-rich games in the world. And with our 2 new teams in Warsaw, we have a very interesting situation. Below you can see the statistics and facts from the 8 games that the Warsaw Boars and Warsaw Saints have played in the last month. The picture is in English because some of the words can't be translated 🙈⠀ ⠀ #AFL #AussieRules #FutbolAustralijski #Sport #Australii #Futbol #poland #polska

Would you like to know which AFL players were born or have parents born from your home country?

The AFL Players Association have released their 2020 Multicultural Map, that features more than 200 players and 40 different countries.

Have a look below, plenty of European countries feature!

👥 202 players 🌎 41 countries Introducing the 2020 @aflplayers Multicultural Map! Follow the link in our bio for a downloadable version of the map.

Europe unites for a spectacular day of footy