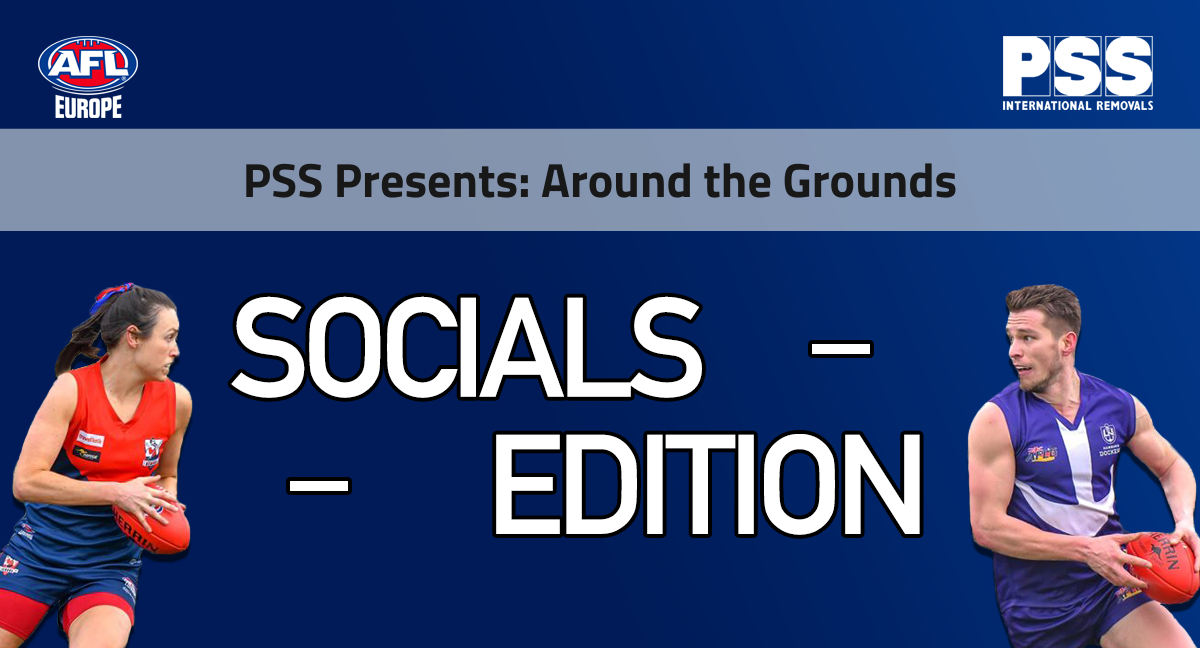 In a typical season, Around the Grounds features weekly recaps of the most exciting footy matches being played around Europe, but in 2020, it’s taking a turn.

Each week, we’ll be sifting through the AFL Europe social media channels to see what you guys, whether it be yourself, your club, your league or your country, in the footy community have been getting up to.

So let’s get to it and dive straight in to look back on the first week of April!

The player’s at Cardiff Panthers jumped on video sharing platform Zoom for a bit of fun with some Wednesday night trivia!

All iso and no play can make anyone dull, not our Panthers! Wednesday night quiz using the Zoom app, hosted by our social sec @_taraedwards . With these unprecedented times it’s of paramount importance to get around your teammates, responsibly, to make sure they’re doing well in their headspace 💙 #AllHailPanthers

Coaches and players from Frankfurt could be seen on Zoom too! Holding an online virtual training session, talking daily exercises as well as some footy analysis.

Tonight we had our first virtual Training session with Captain Basti, Coach Dwight+ Malte! We were talking about the daily exercises. Then Dwight was showing his screen and we were watching the team win @westcoasteagles and we were learning more about stoppages! #Frankfurt #Redbacks #Redcats #oneTeam #Afl #wearerising #knowledgeable🏈👏

The Wandsworth Demons have shown off how their past and present players are keeping in good nick in isolation with this creative video on their Facebook page.

From New York, to Canada, to Melbourne to London, Demons all around the world are having to distance themselves from each other, but that doesn’t mean we can’t connect in other ways! We won’t let social isolation get in the way of us still being able to move the footy around 🙌🏻Thanks to the wonderful cast of world class athletes and professionals for the video shoot 😂❤️ Ricci 🇧🇷 and Juice 🥤 #FILTFC #DEE5

Posted by The Wandsworth Demons on Saturday, 4 April 2020

Meanwhile, back in Australia, WARF Radio will be spending the next few weeks on their socials recognising all women’s AFL clubs across the world, with a Simpson’s twist.
Check out the ‘Simpsonised’ Wimbledon Hawks and Wolverhampton Wolverines as a few European teams have begun to feature!

The Wolverines have supplied players to both the England Vixens (9-a-side) and GB Swans (18-a-side) national representative teams.
Find them online at https://t.co/7Nx01gTAI9 pic.twitter.com/UZ7NzxLxXM

And one that has been playing on all of our minds, Glasgow Sharks have shared a meme that hits us right in the feels.

We’d also like to see what you’re getting up to at home and how you’re keeping involved with footy! Be sure to tag us in your posts for your chance to feature in Around the Grounds – Socials Edition.

Palmers Relocations signs on for 2020