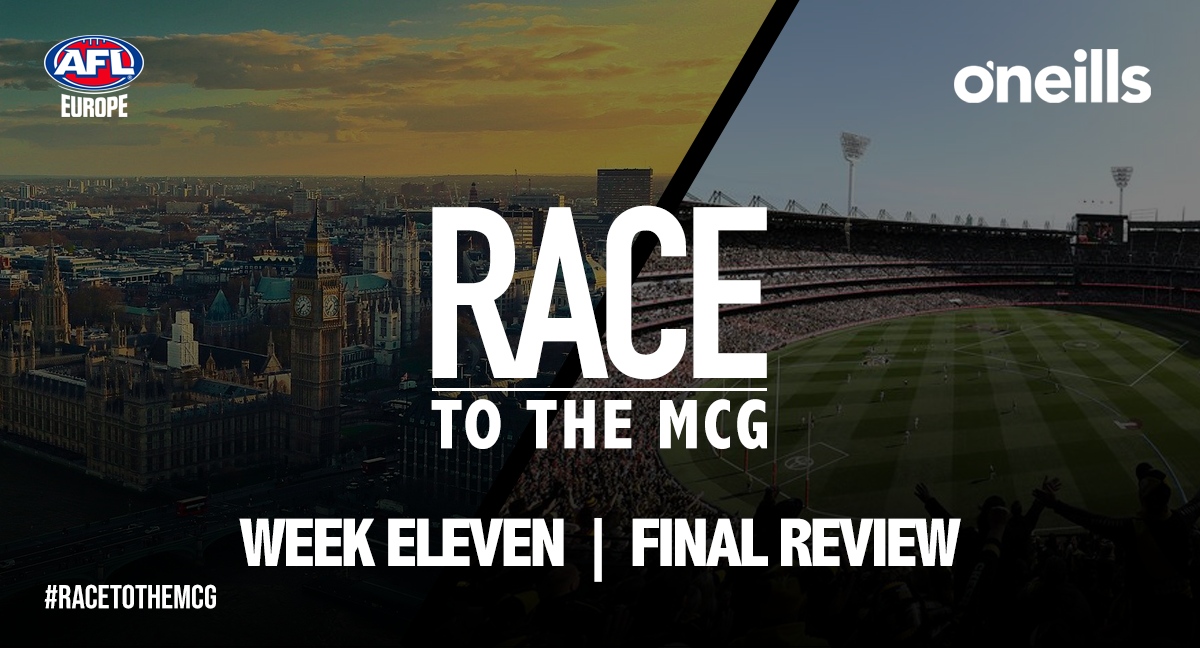 AFL Europe’s Race to the MCG has officially ended with Germany leading the women’s competition right from the get-go and becoming the first women’s team to run the distance from London to the Melbourne Cricket Ground.

The team required just over 484km last week to reach the finish line of 16,900km.

Germany gave it their absolute all throughout the entirety of the competition. With almost a complete 30 runners every week, the team did not once drop below 1,500km for weekly distance covered.

Assistant Coach of the German Eagles, Marijka Bright, was the driving force behind Germany’s efforts. Creating spreadsheets, keeping awake past midnight to record team results and continually encouraging all runners throughout the race whilst covering some incredible kilometres herself.

“The Race to the MCG was definitely a challenge, but after having all of the training camps, Euro Cup and IC ’20 cancelled or postponed, it gave us something to focus our energy on and bring us together as a team,” Bright said.

“At times it was not easy – we had a couple of weeks where we were very close to not hitting the benchmark – but it was great to see everybody putting their shoes back on, on the Sunday afternoon/evening and reaching the kilometres that we needed.”

In week four, Germany had put in their best effort notching 1,905km and becoming almost 2,000km clear of second place. Showing off their competitive spirit, their second best weekly effort came almost at the end of the competition, completing over 1,700km in week ten.

“In our first week we managed to reach 1,519.5 km. What we didn’t know was that the benchmark rule would come into place. Whilst it made our journey at times difficult, it gave us the motivation to hit our kilometres every single week.”

Germany boasted six Performances of the Week, three of them coming from one of the competition’s top runners, Jane. E.

“The healthy competition at the top of our kilometre table each week between Jana. E and Leila. M was always something to behold,” Bright said.

“Our captain Theresa. K went specifically on a hiking holiday to ensure she continued to contribute to our total. Her 40km mountain hike during this trip was our biggest singular effort and extremely impressive.

“But it wasn’t just the participants who were able to get the big numbers who were impressive. We put in a great team effort and we had those with full-time, stressful jobs, as well as those who were carrying injuries, who were still able to contribute meaningfully to the race every single week.”

Last weekend the German Women National Team 🦅 were privileged to learn from and be coached by an AFL Premiership winning player and current AFLW coach of the @brisbanelions. What an unbelievable weekend! We learned so much and met an unbelievable coach and person @craig.starcevich The weekend was full of team building exercises, having fun and learning more about the game we all love so much! Thanks to everyone who came all the way to Heidelberg to be Part of this amazing experience! #eaglesflyhigh #aflw #trainingscamp

For finishing first, Germany will now receive an entire playing kit, thanks to Race to the MCG major sponsor, O’Neills.

“During these uncertain times, it has been great to be able to have the Race to the MCG,” Bright said.

“In a time where we were unable to get together as a team and execute the plans that we had made in the lead up to the International Cup, it was a great team building tool and managed to give us a focus and a common goal to work towards.

“We would like to thank AFL Europe for putting on and managing the competition – a great concept and something that we as a team will remember well into the future.”

See below for the final leaderboard in the women’s competition. 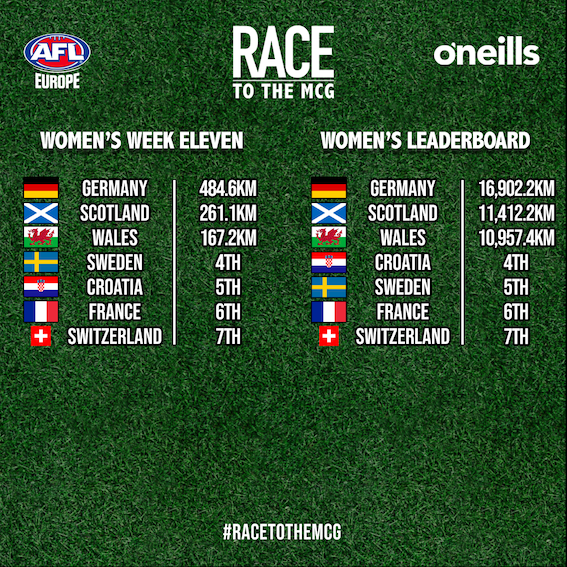 Switzerland were one of five remaining teams to beat their week one benchmark, regularly impressing with their weekly efforts.

Head of Women Development and Secretary for AFL Switzerland (and Swiss player herself) Effie Senti was delighted with the team’s finish.

“Our team was rather small, however, we had some very motivated girls in the competition,” Senti said.

“It helped us to strengthen our AFL Switzerland family spirit as we got to know other players’ skills from different clubs even better.”

Motivation for the Swiss team to push through to the end came from working as a team, encouraging and checking in on each other as the week’s went by.

“(Motivation) was mainly through encouraging others to track every single walk and run. Some even did more than they wanted originally to keep the momentum going,” Senti said.

Whilst it was very much a team effort, there was one particular individual named Norina from the Zurich Giants that Senti was very impressed by.

“She (Norina) hasn’t been able to participate in any footy activities due to her change of home, however, she was the one who pushed hard and did lots of running and walking.

“Replying once to my message about how well she’s doing, she mentioned ‘although I can’t be there for the team at the moment, I want to contribute with running’.”

Despite being one of the smaller teams in the competition, the Swiss very much enjoyed the Race to the MCG and would even like to see the competition turn into a yearly thing.

“It was an awesome idea and I think it motivated people to keep moving although the COVID-19 was a setback for lots of sporting people around Switzerland and Europe.

“I think such a competition might be even worth having each year to keep the players fit and motivate them to do more physical activity.

“Some people, who are not playing footy due to their age or whatever reason, participated and felt the team spirit, which is an awesome thing! Well done!”

AFL Switzerland now look forward to completing their shortened 2020 season, with the grand final to be held on the 19th of September.

“Besides that, lots of training sessions and ‘come & try’ events/recruitment work is going on in Switzerland. We are excited,” Senti said.

Congratulations to the nine remaining teams who exceeded their week one benchmark totals right until the end of the competition.

In the women’s, the remaining teams were Germany, Scotland, Switzerland, Sweden and Wales. In the men’s, we had Austria, Germany, Poland and Wales.

We would now like to announce that the two teams that were randomly drawn to win free entry into the 2021 Euro Cup were Scotland’s women’s and Wales’ men’s.

It was great to see all teams embrace the challenge over the eleven weeks, and it has been incredible to see both the personal and team distances that have been accomplished.

We hope the competition brought an increase in motivation, engagement and fitness within all of our AFL community’s around Europe.

A final thanks to who this competition would not have been made possible without, AFL Europe’s Apparel Partner and Race to the MCG major sponsor, O’Neills.

Any teams looking to purchase on-field or off-field kit for 2021 please contact AFL Europe for an introduction to the amazing team at O’Neills.