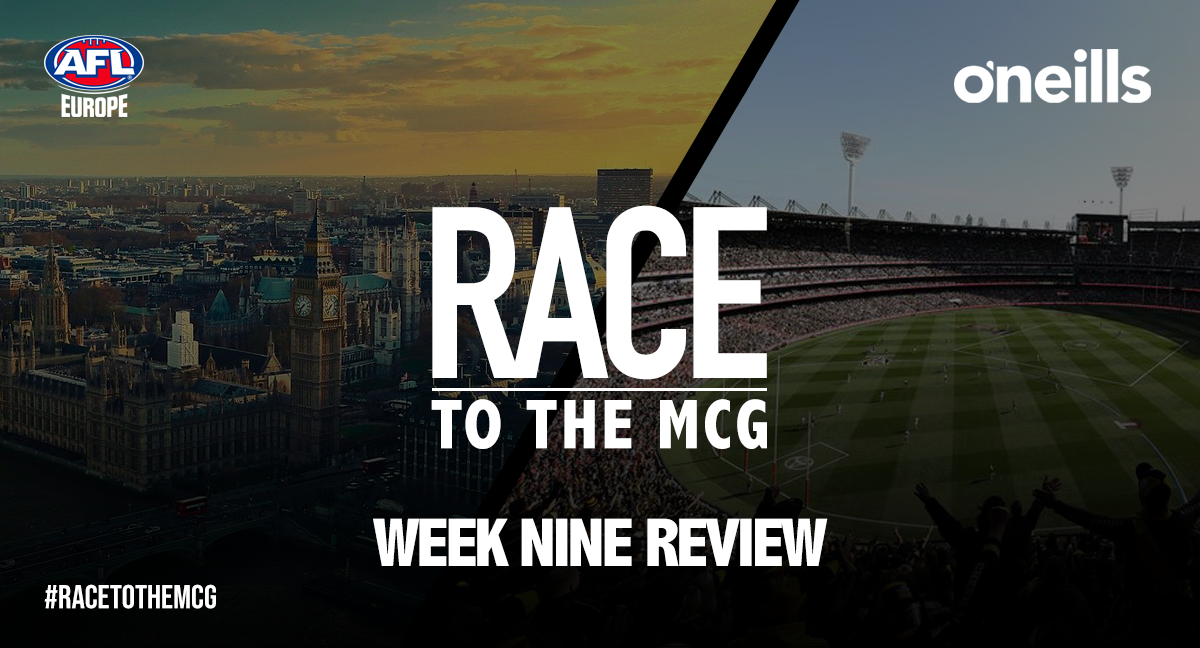 THE men’s competition has officially come to a close after Wales registered their final kilometres to reach the MCG last Saturday night.

Racing from London to the Melbourne Cricket Ground, participants tracked their walks and runs in an attempt to bring their team to the total distance target of 16,900km.

A huge congratulations goes out to Wales for becoming the first team to cross the finish line in just over two months from the start of the competition.

President of AFL Wales and Race to the MCG team manager, James Gibson, was thrilled with the result and how all runners pulled through as a team.

“For us it was a brilliant team effort, there was always someone different stepping up each week with multiple runners exceeding the 100km mark which meant others could recover a little,” Gibson said.

“It was certainly a challenging competition with its highs and lows but the buy in grew and grew as the race went on.

By week three of the competition, Wales had hit the front and never looked back, using “little battles” with each other as motivation to succeed.

“The internal competition and desire to win for Wales was massive. Huge thanks to our kind donators for the internal prizes who without you we wouldn’t be in this position.

“Alongside our personal requirements, the team was keen to raise some money for our charity Jacob Abraham Foundation which has a number of personal connections to the team and we thought it was poignant given the time we are living in – mental health is so important and this competition certainly gave the team a mental goal to focus on!”

Whilst the 16,900km was a fantastic accomplishment from the team itself, Wales’ individual runners put on some impressive efforts which saw them feature in a number of the Race to the MCG Performances of the Week. 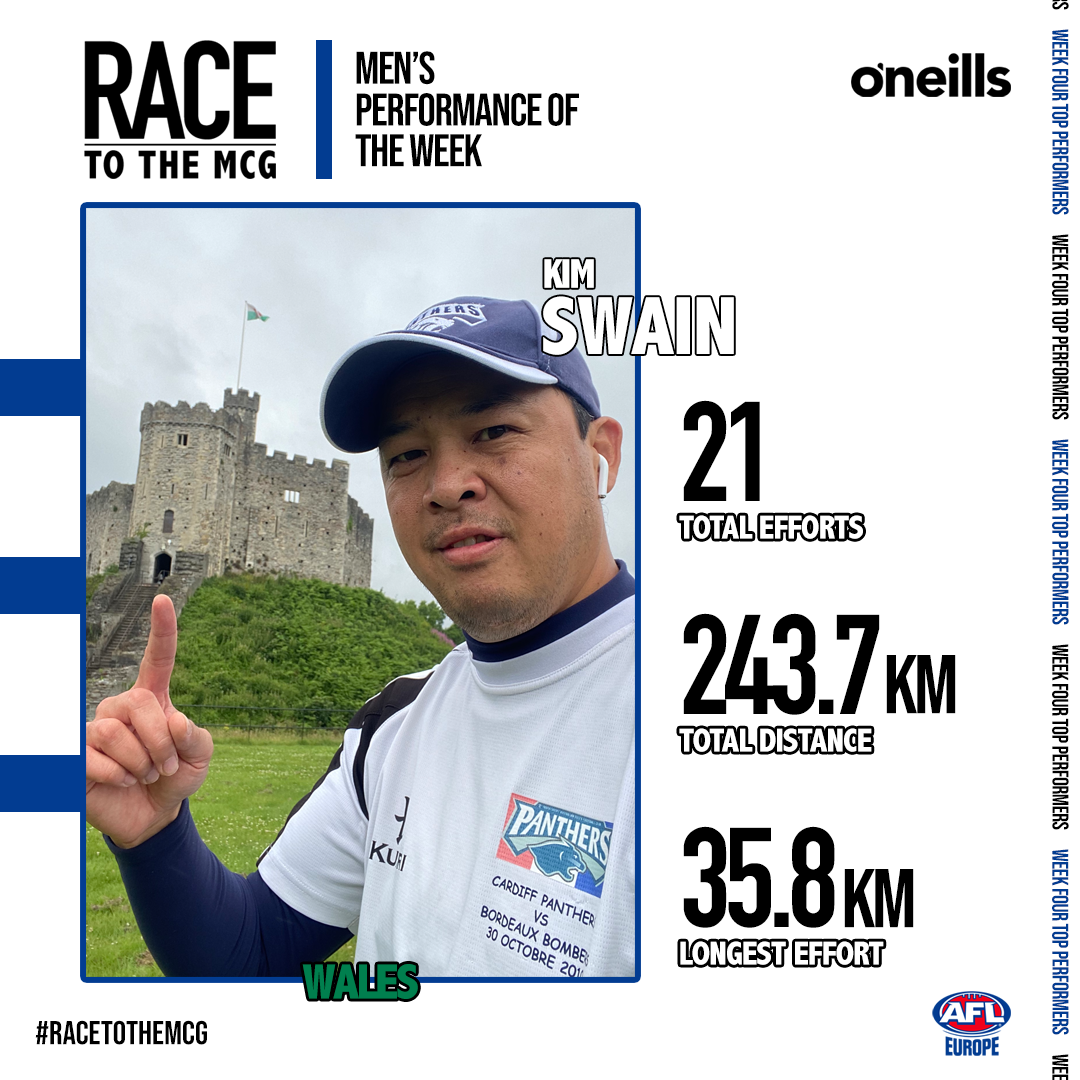 Wales’ first Performance of the Week in week four.

“Without the team effort we wouldn’t have been able to complete the challenge – we said from the start it will be the middle men that win it for us as buy in throughout the pack is so important in this endurance race,” Gibson said.

“Huge shout out should go to the efforts of Tom Case, Kim Swain, Mark Horsman and Jon Saunders who all exceeded 1000km and Will, Paul and Stuart for being just under the 1000km mark.”

Footy’s restart has been able to slowly resume in Wales, with a handful of clubs returning to training. So what’s next for AFL Wales?

“We hope we can partake in the Festival of Football, as long as the government guidelines allow,” Gibson said.

“We look forward to seeing the other teams at Euro Cup in Scotland next year and congratulating them on their efforts.

“A huge thank you to AFL Europe for putting on the Race to the MCG and organising it so well – a very challenging feat! Also massive well done to all teams that took part – what an achievement for everyone to keep going for this length of time!”

Thanks to O’Neills, the official Apparel Partner of AFL Europe and Race to the MCG major sponsor, Wales will receive a brand new playing kit for their 2021 Euro Cup squad.

For the overall results, finishing not far behind in second and third was Scotland and Germany, with Croatia and England rounding out the top five respectively. 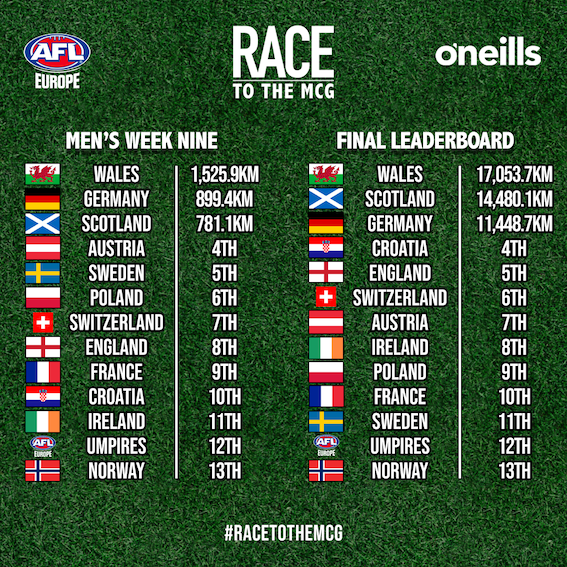 Leaving their best week until last, Austria finished 4th in the week and jumped up to 7th in the overall leaderboard!

Just 250km was the difference between 7th and 11th, including a mere 13km between Ireland and Poland.

Sweden too saw their best weekly placing in 5th, as France in 9th put on their best effort since week five.

Ending the competition, there were just four teams who managed to outlast their week one benchmarks (week one distance total). Austria, Germany, Poland and Wales will all go into a live draw to decide who should win free entry into the 2021 Euro Cup in Scotland.

But first, we await the final results in the women’s competition.

Sitting just over 2,000km away from the finish line, we could be just two weeks off from Germany’s women’s reaching the MCG.

Another powerhouse effort in week nine saw Germany finish on top for the ninth consecutive time. 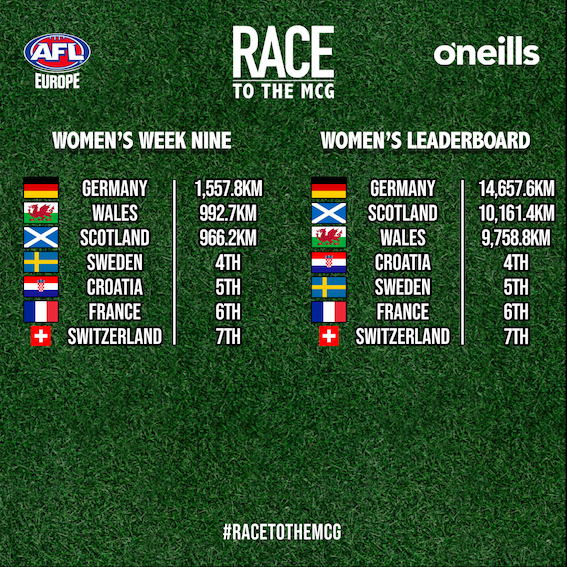 Week nine also saw Scotland reach the 10,000km mark, however there were no changes to the overall leaderboard.

Germany, Scotland, Sweden, Switzerland and Wales were all once again able to reach their week one benchmark.

We encourage you to continue to share with us your journey to the Melbourne Cricket Ground by tagging @AFLEurope and using the hashtag #RACETOTHEMCG.

Pirates steering in the right direction
Scroll to top