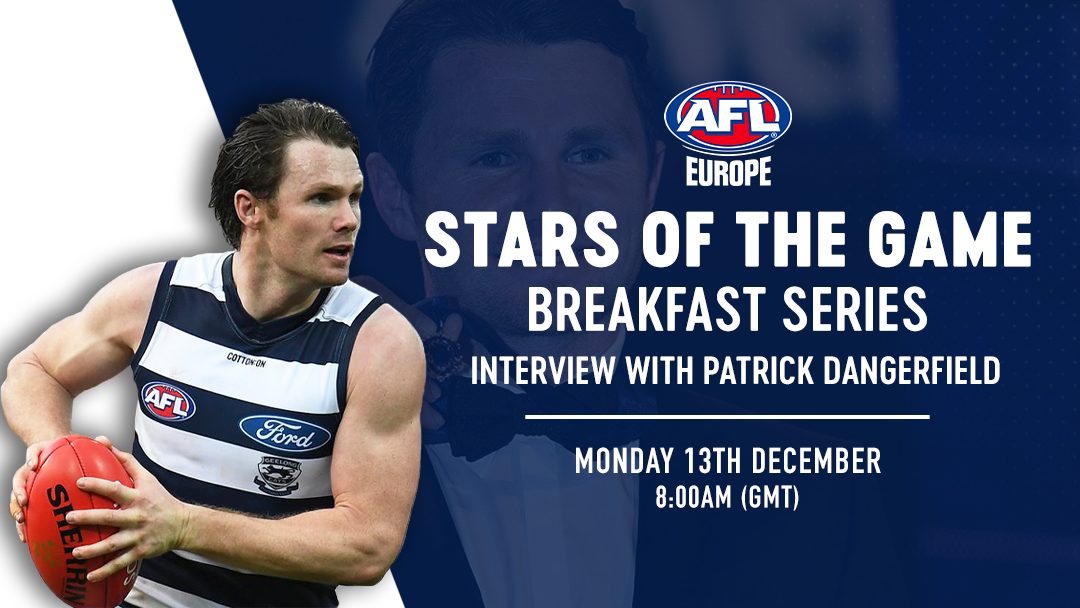 AFL Europe are excited to announce the second edition of our Stars of the Game Breakfast Series. This time, we’re going to be joined by AFL superstar, Patrick Dangerfield.

The live interview event will be held on Monday, 13th December, is free to join and begins at 8:00 AM (GMT), running for 45-minutes. Upon registration, you will have the opportunity to submit your own question to ask our special guest.

Registration is open to anyone up until the event begins next Monday, 8:00 AM GMT. Community questions will need to be submitted by the end of Friday, 10th December to be considered.

A confirmation email with the webinar login details will be sent to you upon registration. Please email admin@afleurope.org if you experience any issues. Dangerfield was drafted by the Adelaide Crows and made his AFL debut in 2008. After eight seasons, he moved home to Victoria to play with the Geelong Cats.

Dangerfield’s career consists of numerous honours and achievements, including the prestigious Brownlow Medal and eight All-Australian team selections, and with his growing 285-game career, is highly regarded as one of the best players in the competition.

He is also the AFL Players Association President and has represented Australia in the International Rules Series against Ireland four times. It’s going to be a fantastic interview with “Danger” and this event is one not to miss!

AFL Europe’s Stars of the Game Breakfast Series was first introduced in August 2021 with Eddie McGuire as the first guest.

The series invites some of the most popular and successful people involved in the AFL and AFLW to be interviewed by AFL Europe with questions focused on each guest’s experiences and insights into the elite men’s and women’s competitions, as well as question submissions from the community.