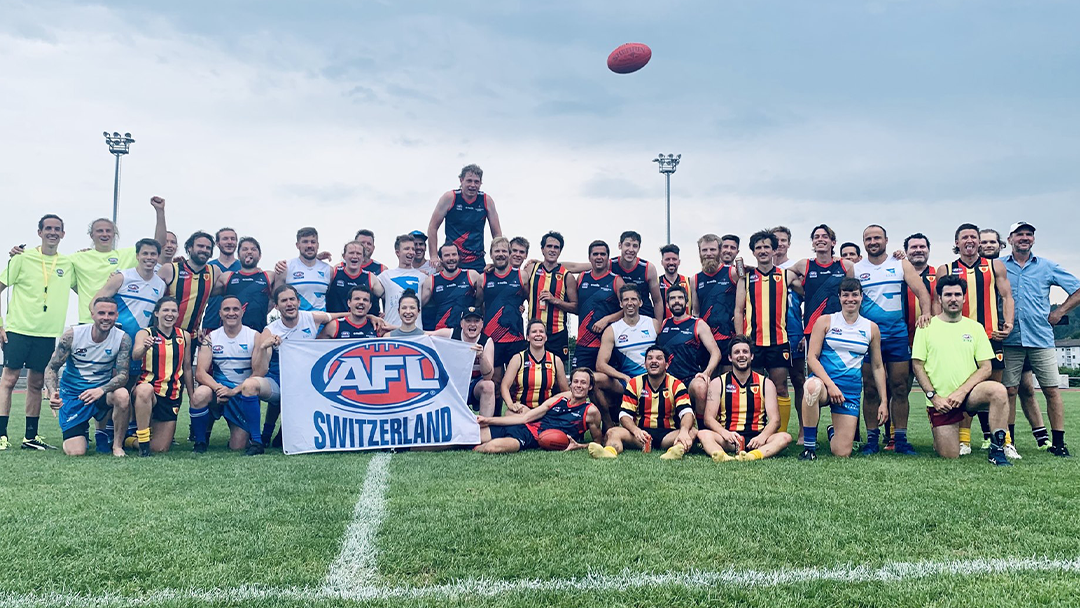 The 2021 AFL Switzerland season kicked off this month with the Zurich Giants hosting the first of four rounds as “Rhyder Round” in honour of the departing Giants’ graphic designer, Tim Rhyder.

The second round was also completed and played in the Canton of Zürich, as the Winterthur Lions hosted the day and welcomed all players from the league. It has been a great return so far to Australian Rules Football in Switzerland, as President of AFL Switzerland, Effie Senti, recaps the action.

The first match of the 2021 season was a rematch of last year’s grand final, with the Giants hosting the mighty Jets. Both teams got off to a fast start, kicking goals early on. The Giants set up well defensively and it took the Jets a while to break through. Eventually, Geneva picked up some wind and damaged the Giants with some very fast and ruthless surge-football. After a great attacking display, the Jets entered half-time with a 32-point lead.

The Giants came into the second half looking reorganised across the backline. They played with much better pressure than in the first half and set up well behind the ball.

With some strong bodies in the midfield and a dominant performance from Nick Nelson in the Giants’ ruck, they showed just how good they can be when they have control of the game. In the end the Jets just always seemed a step faster than their opponents which was enough for them to comfortably see out the game for the Jets’ first win of the season. The Lions joined the action in game two, taking on the Jets right after their emphatic win over the Giants.

Unsurprisingly, the Jets took control of the game early on, setting up well and finding plenty of spaces to run into. However, the Lions managed to hold them at bay for much of the first half due to their great pressure and hard physical contests, seemingly putting off the Jets and not letting them get into a decent attacking flow.

The Jets truly showed their class and experience in the second half, overrunning the less experienced Lions team and putting themselves in a great position for the win.

The Lions can still hold their heads up high though as they never gave up their fighting spirit and there were some fantastic efforts put in by players new to the game, showing signs of a great future at the club. Both teams fought hard until the end yet it was another hard-earned win for the Jets.

After the Lions snatched the win in a well-contested friendly match between the two sides the previous week, it was the Giants who were under pressure to get their first win of the season.

The Giants set up very well early in the game and were looking to take control from the get-go. They seemed very organised on the field and knew exactly what they were doing. The Lions came at them with a very fast, aggressive and direct style of play, occasionally breaking through the lines. Although, the Giants consistently stuck by their game plan as the Lions pounced on every mistake and played well on turnovers. At half-time, the Giants held a narrow three-point lead.

The game resumed with the same intensity and hard contests similar to what we saw in the first term. The Giants continued to impress with their deadly execution and well-drilled system.

The hard work at training seemed to be paying off as the Lions struggled to keep up late in the second half. The Lions were visibly tired after back-to-back games, leading to rash decision making and costly turnovers in the late stages of the game, resulting in a nail-biting biting affair that went right to the wire with the Giants ending up on top.

The reserves game was the first time the Basel Dragons were able to don their guernseys since 2019, so despite the result, it was a proud day for the club. From the start, however, the affair was somewhat one-sided, with the Geneva Jets reserves kicking away to an early lead during the first quarter.

Basel managed to stem the tide over the next three quarters, and even managed to bag a few goals, but the result was never in question, with the Jets running away with a ten goal plus win. Regardless of the scoreline, it was a good strong showing all round, with a number of players for both clubs having the opportunity to play their first game of Australian Football.

Basel’s significant number of debutants showed particular promise, with Carl Joseph demonstrating a natural ability on the wing, Clement Roch proving he will be a strong force down in defence, Cecile Frey showcasing her strong engine through the midfield, and Wade Hookham exhibiting a palm-off skill worthy of the great Dusty himself.

Only scores available at the moment, report will be updated on the AFL Switzerland website, shortly.

(The Reserves sides played a friendly game this round).

Thank you to everyone who is part of the Swiss footy family. We are already looking forward to playing more footy in Switzerland this year, with the next two dates set for August 14th in Geneva, and then for September in Lausanne.

Festival of Football debut for players in Israel