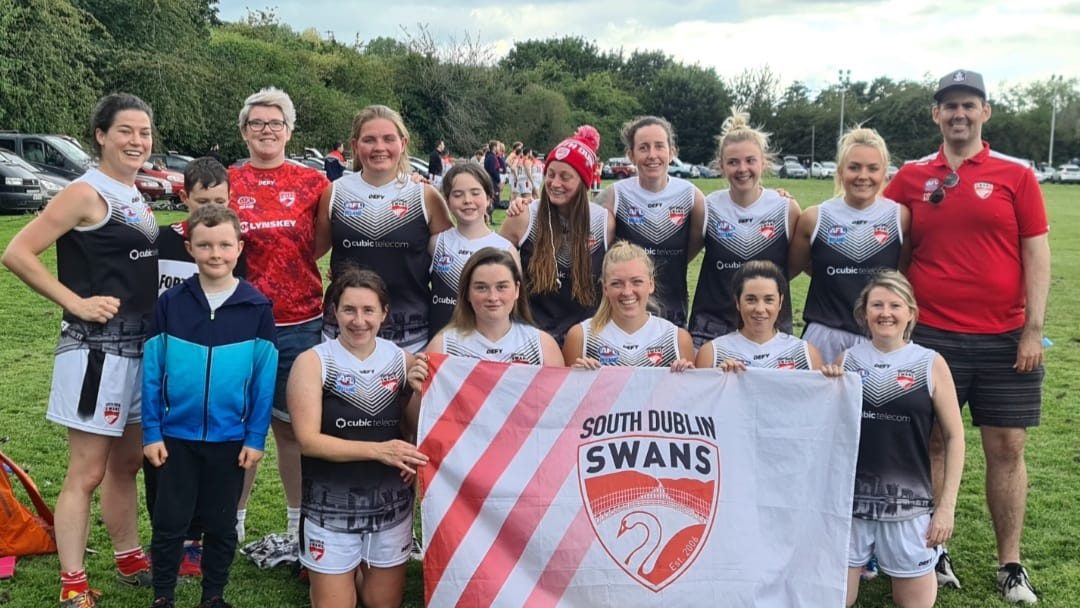 Round five of the Irish season saw the South Dublin Swans men’s and women’s sides host their Cork counterparts in Dublin, while the Belfast Redbacks made their way west to take on the Galway Magpies who were in search of their first premiership win in 2021. Thanks to Stephen O’Sullivan from AFL Ireland for the recap.

The Redbacks headed to Galway knowing that only a win would do in their pursuit of a second place finish and a home preliminary final. They also needed the Leeside Lions to keep their unbeaten record intact, however, they could only do their own job and hope for the best result from match in the capital.

The Magpies were still chasing their first premiership win of the season and this was possibly their best chance, being their final home game. Any hopes of that were dashed early on, the determined Ulster men, knowing the task at hand, hit the scoreboard early and raced into a comfortable lead.

To their credit, Galway fought hard and their talisman, Shaun Murphy, added two more goals to his impressive haul. The Aussie rarely let’s his side down in front of the big sticks. James O’Flatharta also on target for the home side.

The Redbacks were ruthless on the day and only for slightly skewed kicking, would have won by a more comfortable margin. Their job was done, winning by an impressive 68-points. The Cork Vikings came into this one on top of the ladder and were eager to cement their place in first position, to ensure a grand final spot. The hosts, still looking for their first victory were determined to try and upset the favourites.

In a unique opening to the day, fixture clashes meant that the venue of St Brendan’s GAA was unavailable for a 12.30 PM start. The game was moved to nearby Phoenix Park. The Swans welcomed back Aisling Hanley and Vanessa Sterry from injury as well as Tanya Farell and Ita Heneghan who togged out for the Swans for the first time.

After a messy start, the Swans had a promising first quarter, showing huge improvement from their previous clash. They contested fiercely around the footy but the experienced Vikings were the ones who impacted the scoreboard most. Captain, Maria Quirke and Annie Walsh taking control for the Vikings early on. More confusion meant the second quarter was back at St. Brendan’s. The Swans lost two players due to prior commitments which saw their bench diminish. The Cork women picked up where they left off, dominating around the stoppages and taking control of the contest. The Swans fought hard against the seasoned Vikings and there was some beautiful football played by both sides. Shannon Stevenson was again influential on the scoresheet for the Vikings, who welcomed back Caroline Condon, who was also amongst the goals.

The second half continued in the same vein as the first. Annie Walsh and Maria Quirke added to their goal tally while Ashling Hanley (2) and Sorcha Nolan (2) bagged the majors for the home side.

Joanne McNaughton, Jane Leahy, Vanessa Sterry and Mailin Vettiger were particularly impressive in the backline with hard tackles for the Swans. Special mention also to CJ Murphy for the Vikings who kicked two goals once more for the Cork Vikings and Bláthnaid Wiseman who was impressive throughout.

In the end, the Vikings were comfortable victors against a steely and determined Swans outfit who will gain much experience from the contest. In the top of the table clash, and plenty at stake, the Lions put their unbeaten record on the line against a home side who knew victory would secure at least a home preliminary final.

The Cork women had won earlier in the day and the men were determined to complete the double in the capital. They came out of the blocks firing, enhancing their status as the top team on the ladder. Five unanswered goals in the first quarter gave the Lions a comfortable looking lead in what are normally tight encounters. Harry Hynes, Darren O’Dwyer and Kev Jones all on target for the Leesiders.

The Swans, for all their efforts, couldn’t get going in the first quarter hitting a few behinds. They quickly bounced back in the second term however, and the returning Gavin Murray and Seamus Owens were impressive along with debutanst Rasmus Bruun and Conor McGroarty. They dragged their side back into the contest! The home side kicked six unanswered in the second term and took a slender lead into the big break. The second half was a much tighter affair, both sides showing their mettle with tough tackling and fearless contests throughout the park. Paul Murphy and Alan Daly goaled while Gene Casey and Drew Baldwin responded for the Swans. Behinds were traded in a nervous finish and Andrew O’ Neill kicked his second of the day for the Lions to give them a chance to snatch victory. Seamus Owens was on hand to claim the victory for the home side after some great play down the right wing through Connor Dunne and Joey Carroll gave the Dublin man the simple task of finishing from a few yards out, to claim the spoils and a home final for the Swans.

A cracking round of footy saw the South Dublin Swans claim a home prelim, at a minimum, while the Belfast Redbacks claimed a confidence boosting victory going into the final round of matches. The Cork Vikings continued their domination in the women’s league and secured the first spot in the grand final.