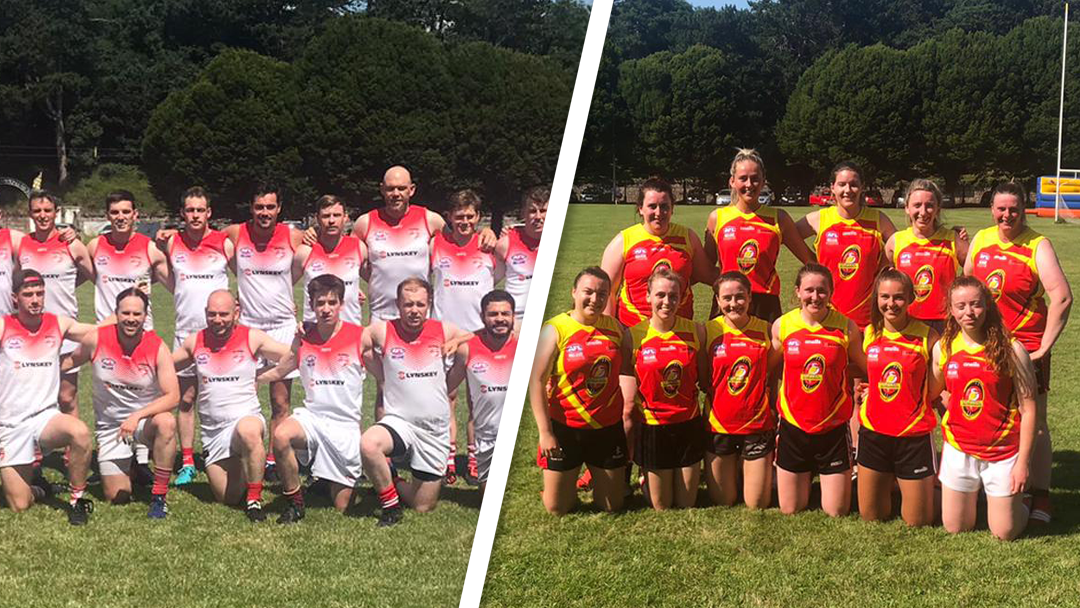 Stephen O’Sullivan, Reporter for AFL Ireland, recaps all of Ireland’s round two action that was held in Dublin last weekend.

Round two of the AFL Ireland men’s and women’s premiership competitions fell foul to cancelled games scheduled in Galway last Saturday, however, we did have two cracking games played in the capital.

Both sides came into this game on the back of mixed fortunes in round one. The Swans were looking to start their campaign with two wins on the bounce, something that has eluded them for the past number of years.

The Redbacks, coming in on the back of a defeat at home to the Leeside Lions, hoped to kick start their season in Dublin, where they have had a lot of success in recent years. As the mercury hit 28°C for a lunchtime first bounce, both teams came out with a point to prove. It was the Belfast side that hit the ground running early on, with the experience of Kevin McSorley, Seán Paul Henry, Gerard Walls and Benny McDevitt, the Redbacks took control of the first quarter.

The skilful Dean Skinner was a handful for the Swans mids, and he contributed heavily on the scoreboard throughout including a sublime goal around the body from the boundary line. The Swans, to their credit, kept in touch with their Belfast counterparts and scored a couple of late majors in the first term, including one just before the siren that crept inside the upright, from Seamus Owens.

The second term was a tighter affair. The Dublin side totted up a lot of single scores, locking the ball inside their forward 50 for majority of the second term. Kyle Devine, coming back into the side, scored a goal for the Redbacks that effectively outdid the Swans hard work. However, the hosts piled on the pressure still, and managed to claw the scoreline back to within five-points. The second half was dominated by the hosts. Gene Casey and Connor Dunne set the pace in the third with two fantastic goals apiece. A solo run from halfway including two bounces and a pin point finish from the latter, was arguably the goal of the game. Donal Purvis and Paul Sciver tagged on another goal each for the Belfast men to halt the Swans progress going into the last term.

The final quarter followed the same pattern as it did in the third, the Dublin side asserting their dominance in the sweltering sunshine. Dan Matveyeff grabbed two goals, while Ben Coughlan scored his first goal for the club from a tight angle in the corner pocket. Kyle Divine replied once more for the Redbacks but the Swans fitness and pressure told in the end.

A fantastic effort by both teams in tough conditions produced a fantastic game of footy. In the end the home side claimed the victory which sees them sit top of the pile, for the time being. The Ulster Kookaburras travelled to Dublin on the back of an impressive victory first time out against the Cork Vikings in Belfast. The Swans, meanwhile, debuted at home against the Galway Magpies in a non-premiership match-up.

For the second game day in a row, the women’s premiership fixture was played in searing heat in the capital. The home side scored an early goal through Sorcha Nolan, who was impressive throughout, after a mix up in the Kooks defence. The Ulster women managed to regain their composure after a sloppy start, and in truth never looked back. They managed five first quarter goals to a further one from the Swans. Emma Dwan, who showed fantastic leadership skills and fierce work ethic, grabbed the second major for the home side. The second term was dominated once more by the Kookaburras, although this quarter they were less accurate. Keeping their hosts to a scoreless quarter , the Kooks dominated the centre clearances and inside 50s, but only managed two further goals with four behinds, giving the Swans a bit of respite.

Continuing her flying form from round one, Eva Cafolla was amongst the goals in the third. She managed to bag six goals on the day to take her to the top of the goal scorers chart. League Casey, another player who was in fine form for the Ulster side, kicked five majors of her own which capped a glittering display. Sorcha Nolan managed to grab her second of the game for the Swans, who to their credit, battled hard against their more experienced northern counterparts. The Kookaburras’ red hot form continued into the final term. Scoring seven unanswered goals, the Kooks laid down a marker for the rest of the season. Beige Walsh (3), Annie McCole (2) and Claire McHugh (1) were also accurate through the big sticks on the day, cementing their team at the top of the ladder.

The South Dublin Swans, humble in defeat, gave the Kooks a rousing applause after the game. In truth, they were second best for the majority of the game, but their fearless tackling and tireless running was something that shone through on the brightest of days. A great learning experience for the Dublin side, while the impressive Kookaburras go from strength to strength.

Round three will be held on this coming weekend, July 24th. The South Dublin Swans women’s and men’s teams head south to Cork for their first away trip to face the Cork Vikings and Leeside Lions, respectively. The Galway Magpies sides will travel to Belfast to play the Ulster Kookaburras and Belfast Redbacks in what is sure to be another great weekend of footy in Ireland.

Austria’s DownUnderDogs and Galahs to welcome Budapest Bats for debut...