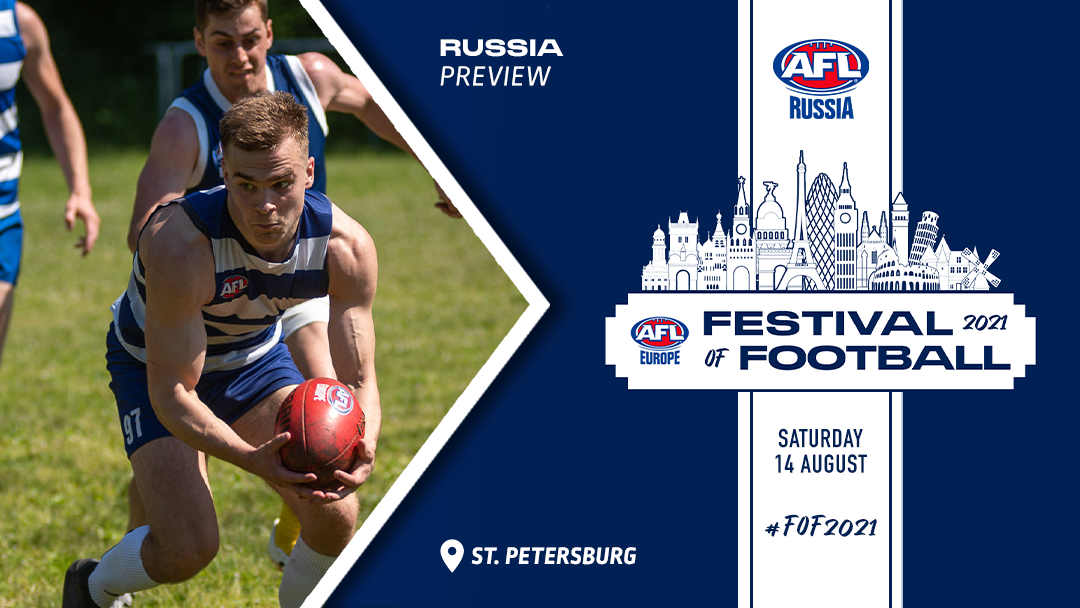 The 2021 AFL Europe Festival of Football will see nearly 15 countries and up to 50 teams competing in local tournaments across Europe and all on the same day of Saturday, August 14th. Check out the action in Russia with three teams competing in St. Petersburg.

St. Petersburg Cats look forward to again welcoming the Moscow Bears at the 2021 Festival of Football.

The Cats, who divide their players into two teams – Baltic Hawks and Northern Tigers – for the St. Petersburg footy league (SPAFL), will again do so this weekend to create a three-team tournament, replicating their successful round robin and grand final that they held in last year’s event. The three teams have enjoyed going head-to-head on a number of occasions already this year.

Whilst the Hawks and Tigers have played their regular match-ups in the SPAFL, the resurgence of the Bears has allowed some inter-city trips and friendly matches, including the White Nights Cup in mid-June.

Founder of the St. Petersburg Cats, Slava Belov, said the three teams have enjoyed a healthy competition this year that he is excited to see follow into the Festival of Football on Saturday. “So far, the St. Petersburg season has been very competitive between the Hawks and Tigers,” said Belov.

“In Moscow, the Bears have made great progress from last year and have a few new recruits. We [St. Petersburg Cats] played them twice this year, the first time was in Moscow where the Cats split into the Hawks and Tigers and they both lost.

“It was a really nice game to umpire with clean contests, and right up until the end it was anyone’s game.”

Just two goals split the Cats and Bears in their June clash, as the Cats held off the Bears for a 14-point victory. All three teams in Russia are eager to go bigger and better at this weekend’s Festival of Football, and look forward to again joining in with the many countries and teams competing all on the same day.

“For a small grass roots community and emerging sport, times like this are a real test,” said Belov.

“But I think it’s [Festival of Football] a great way to unite the community and celebrate our sport, I’m sure it will be a great day of fun.”

On the other countries and teams that are participating on Saturday, Belov shared he was excited to see the Budapest Bats play their debut match after unfortunately missing out in last year’s event. “I remember when we had our first conversations with them and shared how we started… It’s amazing to see that the ball is rolling and they have their first game this weekend.

“It’s great to see the Bulgarian competition up and running too… I’m just looking forward to see everyone playing this weekend.”

Last year’s Festival of Football tournament in Russia saw the Tigers defeat the Hawks in the grand final by just eleven-points.

The Bears, who won just one game on the day, will now be heading into the 2021 Festival of Football with a few more games under their belt and this time around, could see themselves into the grand final.

Post-tournament, the Hawks and Cats will resume their SPAFL season whilst all players in Russia hope to get some international friendlies played, where possible and safe to do so. “No one knows what the travel restrictions will be like later this year but if there’s a chance to travel to Finland, we would like to play a game there,” said Belov.

“We have a great connection with AFL Poland too, so we might try and do something with them as well.”

Five-team tournament, national team selection and activities for the family...
Scroll to top