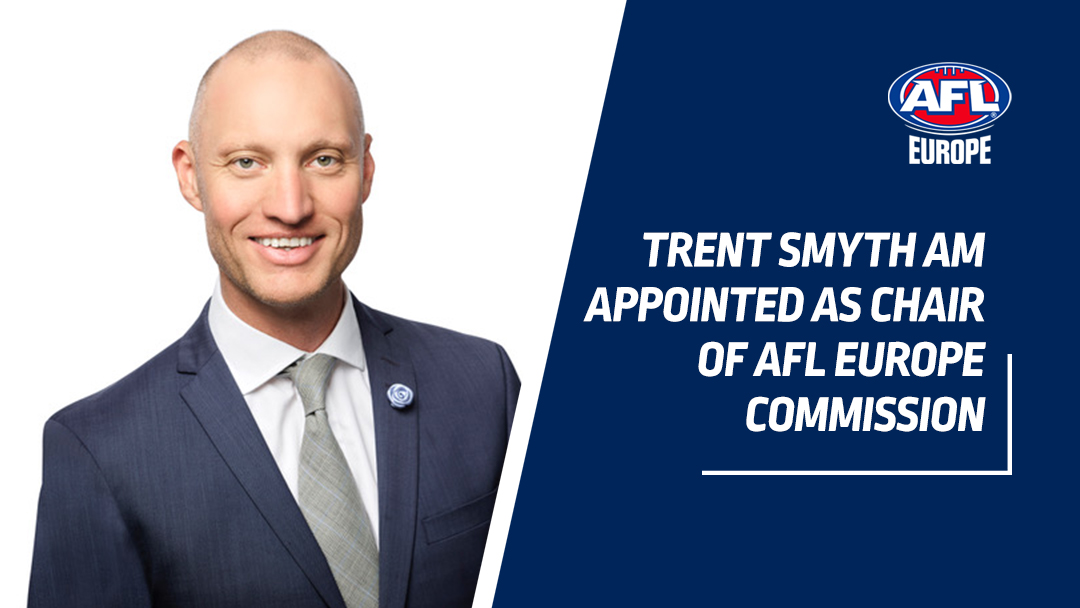 AFL Europe is excited to announce three new appointments to its Commission.

Congratulations to new Chairman, Trent Smyth AM, and Community Commissioners Sarah Howell and Geoffrey Puzzi, who were all successfully elected to the AFL Europe Commission in our 2021 General Assembly Meeting.

Ryan Tucker was also re-elected as a Community Commissioner, and shared that it will be his third and final two-year term. Trent Smyth AM joins the board after relocating to London with his family, where he holds the role of Executive Director of The Chief of Staff Association, a Public Benefit Corporation headquartered in New York, drawing Chiefs of Staff from the world’s largest companies, governments, family offices and militaries.

Mr Smyth is a Director of the Australian Grand Prix Corporation, Founder and Chair of the Sport’s Diplomacy Foundation, and former Secretary of the Consular Corps Melbourne.

Mr Smyth was also awarded the Member of the Order of Australia in 2021, recognising his significant service to international relations, motorsport, and business.

Mr Smyth’s passion, drive and array of experiences will add tremendous value to AFL Europe as an organisation, and as a community.

“While AFL is part of the fabric of everyday life in Australia, it remains a relatively niche sport in the rest of the world,” said Mr Smyth.

“I look forward to working with the team at AFL Europe and the thousands of passionate players, officials and sponsors to build the awareness, involvement and appreciation for Australia’s greatest game.” Sarah Howell joins the board as Community Commissioner of the Western Europe region.

As co-chair of AFL London, Howell was instrumental to the return and success of the 2021 season and recently celebrated the league’s 30th anniversary.

Howell has contributed enormously to the growth in Australian Football throughout England and Europe, including numerous committee roles at club, league, and national level. Geoff Puzzi joins the board as Community Commissioner of the Central/Eastern Europe region.

Geoff co-founded AFL Polska in 2018 and has overseen its growth of just five people in Warsaw to nearly six teams across the country.

Recognising Geoff’s contribution to the sport in Warsaw and Poland, AFL Polska has renamed Warsaw’s MVP award to the “Geoffrey Puzzi MVP Trophy”. The award is given to Warsaw’s best player at training, throughout the season. AFL Europe would like to thank and farewell Michael Currane and Dinko Irsag, who were on the Commission for four and two years, respectively, as well as Oliver Howard who served six significant years as Chair of the Commission, and spoke on his departure.

“After six life-changing years on the Commission, it’s now my time to step down and hand over to an incredible replacement in Trent Smyth AM,” said Howard. “I strongly believe the most important role for anyone departing an organisation is to leave that organisation in a better position than when you started. I am really proud, despite the external impacts of the last few years, of AFL Europe’s development and growth over my years of involvement.

“To each and every one in the AFL Europe community, I want to say thank you. It’s been an absolute pleasure to meet all of you and I really look forward to staying in touch over the journey.”

Howard, Currane and Irsag were all dearly thanked for their remarkable contributions to AFL Europe during the 2021 General Assembly Meeting.