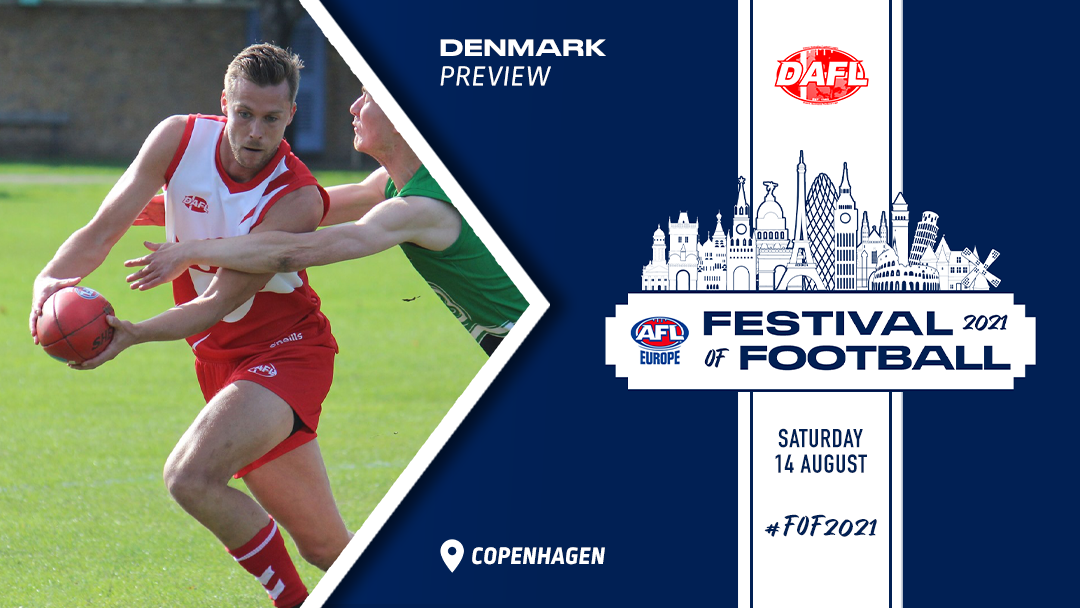 The 2021 AFL Europe Festival of Football will see nearly 15 countries and up to 50 teams competing in local tournaments across Europe and all on the same day of Saturday, August 14th. Preview the three matches that will go ahead in Copenhagen, Denmark.

The upcoming Festival of Football will see men’s and women’s players in the Danish Australian Football League (DAFL) head to the country’s capital, in the midst of their 2021 season, for three exciting games of Australian footy.

The district of Valby in Copenhagen, home of the Barracudas, will host a 9-a-side women’s match, 12-a-side men’s Rookies vs. Old Lizards match and then the Danish Vikings will go against some of the league’s Australian players in a Team Denmark vs. Team Australia 12-a-side match.

All matches will be played with four quarters, as the 9-a-side women’s match kicks off the day at 11:00 AM local time. The two women’s sides will be made up of players involved in the DAFL, as well as any nearby international players should they wish to participate and are permitted to do so.

The men’s Rookies vs. Old Lizards  match will showcase the upcoming stars in Denmark, as well as some of the league’s legends.

The Rookies will be made up of players with less than 10 games to their name, whilst the Old Lizards will include retirees and some of the DAFL’s greatest players from across the competition’s history.

The final match of the day will see the DAFL’s best go at it, as Denmark’s national team will take on a select Team Australia side.

The Festival of Football on the 14th of August lands in the middle of the 2021 DAFL season, that begun back in April. “This year in the DAFL we’ve had two to three teams that have been much stronger than the rest of the competition,” said organiser of the Festival of Football in Denmark and Copenhagen Barracudas Club Administrator, Rasmus Anderson.

“At the Festival of Football, we’re hoping these games that we’re putting on can all be pretty level and competitive.

“The Rookies and Old Lizards match will be great for the players who don’t have time to play or train to now come out of retirement and get a game in.

“The women’s match and having the national team play will attract a lot of spectators to come watch too.”

Votes will be tallied towards the best player from each match, with the player who receives the most votes in any of these games to be decided as best on field for the day.

It’s been almost two years since the Vikings have competed as a collective, in which Anderson shared his excitement to see how the two teams would fare, with a great mix of talent on display.

“It’s going to be close… Denmark in the past have proven that they’re a very good side,” said Anderson.

“I was very impressed that they could challenge the guys from the UK at the 2019 European Championships, and now will face the best Australian players in the DAFL. It’s going to be a high level game.”

As mentioned earlier, players in Denmark have been fortunate to have had already played eight rounds of their 2021 season, but are currently in their mid-season break. Premiers in 2019, Farum Cats, are currently sitting on top of the ladder with five wins and one loss. “It was very disappointing last year that we had to cancel the grand final just a day before it was meant to happen,” said Anderson.

“We’re hopeful and really looking forward to being able to hold it this year.

“But just being able to play footy this year has been great and we’ve seen a lot of new people around the sport which has been awesome. We’re very happy with how everything has been going in Denmark.”

Anderson also wanted to share that there will be spots available in the women’s match for anyone who is interested in playing, permitted they are allowed travel and can do so safely. You may express your interest to Rasmus through Copenhagen Barracudas’ Facebook.

More information on the matches that are taking place in Copenhagen can be found on their Facebook event, here.